I hope this works properly this time.  This is the third time I have tried posting this post.  I had never used screen shots on my blog before and for some reason they don't want to take.  Anyway, here are some final thoughts about the break and some randomizations at the end.

I am going to hang onto the unclaimed teams from the main break to throw into my next break should they be purchased, but if you have seen any base cards that you want just let me know before I get everything packed and they are yours.

For the bonus unclaimed teams I am going to randomize the hit, parallels, and inserts for the teams that did worst in the specific categories in the MAIN break.  I am not including bonus winnings in this, because they are bonus.  In the insert category, there were 4 claimed teams with 0...they are the only ones eligible for the two Xponentials and the Documentary All Star.

The jersey will be randomed among all hitless teams.  I will include the Rockies, but if they happen to win I will give the jersey to who I think had the overall worst break.

It's only fitting that Ryan H. gets it since he sent the packs in.  I will put the other three teams back in to draw for the second card.

Well that worked out well since Darren also collects the Tigers.

For the Cristian Guzman Documentary All Star (that I forgot about earlier).

Congrats to Ryan G. for that one (hopefully you need it for the Super Collection).  Those All Stars are sharp looking cards.  For the Twins you aren't going home empty handed.  I have a dupe Rockies insert also featuring a Twin for them.  Now everyone will have gotten at least one insert per team.

For the Documentary Gold parallels the four teams with the fewest parallels (Cards, Cubs, Rockies, Rangers) I will automatically choose the leftover team.

The choices are Astros, Marlins, Tigers, Royals.  Ryan G. chooses first, then Matt, then Brian, and I will keep the leftover team.  Just comment below with your choice.  Matt and Brian if you want to list your 4 in order of preference you don't have to wait. 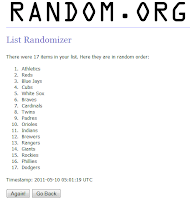 Nathan this card was destined to be yours, because the A's were #1 in all 3 randomizations.  The odds on that with 17 names must be outstanding.  Anyway, congratulations on your "nearly" perfect jersey.


BTW, I joined A Cardboard Problem's case break for Gypsy Queen with the Rox and received my cards a week or so ago.  I have 37 dupes of the 6 Rockie base cards and I will be posting about it shortly, but for now I will randomly include 3 different cards in seven packages and 2 different in the other 8.  Ihope you get some you need for your set if you are building it.

I hope you guys have had as much fun as I had with this break.  I do plan on doing another one in about six weeks or so at around the same price (maybe a dollar more) and I already have the boxes for busting picked out (think chrome).  They should be fun.  We now return you to regularly scheduled programming here at the Quarry.
Posted by hiflew at 10:29 PM

Cool, let's say Astros? Thanks! And hopefully I don't end up with the consolation prizes next time!

Thanks for a nice break. Looking forward to the next one!

Since the 'Stros are taken, I'll have the Tigers.

Thanks for a fantastic break Hiflew, and for the little bonus at the end :)

Thanks for the break. Fun times.

I'll go with the Marlins...thanks for the fun break!