I had already purchased into a Gypsy Queen case break for the Rockies by the time Sam, the Daily Dimwit, announced his break.  I am always one to help out another blogger with a group break though.  In this case I grabbed the Rox along with the Angels.  It turned out pretty well for me because I actually got one mini that I didn't get from the case break along with several other nice cards that I did not have.  I was also very surprised at which box turned out the best for me personally, the Ultra blaster.  Let's check out some new cards for me.

This is the 2006 Upper Deck Ovation Garrett Atkins, one of two Rox I got.  It has an embossed-type design with along with a team color matching design that Upper Deck favored for their side sets.  It isn't a bad set design, but it just doesn't have that wow factor that gets me to build a set.

This Todd Helton is the only card I got from the Artifacts box for either team.  Like many mid-2000s sets, Helton is also the entire Rockies team set.  It is a good looking set, but once again suffers from the lack of wow factor for me.

The best looking of the Upper Deck sets is this 2002 MVP design.  I love dark border sets every 5 years or so (not like Bowman which does it every year).  I got exactly 50% (5 of 10) of the Rockies team set including the Juan Uribe pictured above.  I also got a nice serial numbered silver parallel of Ben Petrick #'d 008/100.  I will tracking these down, hopefully quickly, but with a nearly ten year old set it will be a bit harder.

This was my team's prize from the "Dimwit Value Pack."  That was an amazing bonus pack which luckily had one card for every team (except Sam's), arranged by division and everything.  What an amazing collation!  Anyway, this is a nice shiny 1995 Topps Opening Day Dante Bichette.  In 1995 this was an insert set and not the standalone set it is today.

Here are my partial results for the 2006 Ultra blaster.  The Todd Helton is a short print Lucky 13 Retro subset, which highlighted former members of the old rookie subset for Ultra that had successful careers.  I also got a hit from the blaster, well I sort of got one.  This is an Ultra Fine Fabrics Preston Wilson which show him in a Colorado uniform and has a purple striped swatch, but the team is listed as Astros (on the back as well).  I don't consider this a part of my Rockies team set, but I can see why Sam didn't consider it an Astros card either.  Honestly, I consider it an Astros card, but for now it will reside in the binder with my Rox.

Here are the 4 base cards I got from the Gypsy Queen boxes.  I like the set and the design.  My biggest problem is the Rockies are VERY underrepresented in this set.  There is only one hit to be had for the entire team, a framed mini relic of Tulowitzki.  *UPDATE* The Tulo does not exist and was only on the sell sheet, so no Rockie hits whatsoever in this set.  No autos whatsoever for my team, even though there are apparently 18 billion Andrew Cashner autos or Stan Musial bats in the set.  That's okay, I'll collect my 8 Rockies and leave the expensive buys for other collectors. 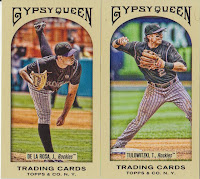 The two minis I got were Jorge de la Rosa and Troy Tulowitzki.  These are both the regular backed types.  The Tulo is the one I didn't get in my case break, so I was happy to see it here.

ANGELS (all for trade)

Here is one of each of the cards I received from each of the 3 boxes for the Angels (I was shutout in Artifacts).  I really like the photo on the Morales card, and I am glad they didn't use a photo of him celebrating a walk off home run (yeah cheap shot I know).  Bartolo Colon was CC Sabathia ten years ago.   The fat guy that is a dominating pitcher.  I don't like the MVP Angels as much because it was during their worst logo ever years.

I also picked up two inserts from the Ultra blaster for the Angels.  I like both of these cards, especially the Vlad.  It would be great for you TTM fans out there.

This 2010 Topps Peak Performance Vlad Guerrero was the Angels representative from the Dimwit Value Pack.  Not great because I already had it, but still a nice bonus.

I was also glad I chose the Angels because they were the winner from the randomizer for this gypsy card.  I have absolutely no interest in collecting these cards, but if you do for some reason.  Shoot me a comment and we can work something out.  Trust me I won't ask for much.  Charlie from Lifetime Topps Project has first dibs because he has the jewel card of this particular gypsy.

I was hesitant to join Sam's break because I knew I wouldn't get many keepers.  I am so glad I went ahead and joined, because I got several great cards that I didn't have and had fun getting them.  Tomorrow I will be showing the case break of GQ that I mentioned several times here.  Tune in then.
Posted by hiflew at 2:31 PM