The answer to yesterday's trivia question is 66 people featured in 1986 Topps have been big league managers at some point.  That number includes practically forgotten tenures of Larry Parrish, Juan Samuel, and Toby Harrah, but does not include the disastrous 4 day offseason tenure of Wally Backman.  The number is sure to rise, since Ryne Sandberg is Philadelphia's "manager in waiting."  I'm sure there might be a couple more that will show up as well, such as current AAA managers Backman, Ron Hassey, Terry Kennedy, and Brett Butler.  However, several new managers are too young to have appeared in 1986 Topps, so we might be getting close to the end of a personal baseball era.  Let's take a look at the second half of the #5 team, the Cincinnati Reds.

The Devin Mesoraco card is possibly one of the greatest "play at the plate" photos I have ever seen and it is up there with the all time greats.  The expression on his face is just priceless.  Proving the notion that you can't have a bad card involving the Wrigley ivy, the Phipps card is awesome as well.  The Gregorius is a rather standard play at second, but even the standard play at second card is pretty good.  The black background makes the Sam LeCure card.  The Wal Mart variations from a couple of years back almost killed my love for the black background, but not quite.  Finally, the Baker card is just a great manager photo.  I love everything going on in that background including the glasses frames, the "so close you could touch them" fans, and the multiple Gatorade towels.

The first 5 clubs on this countdown have something in common, they were all bad for the majority of the 21st Century.  The #6 team on the countdown shares that trait as well.  Check it out tomorrow for the #6 team on my countdown.

Before we leave, here is a bigger photo of the Mesoraco card. 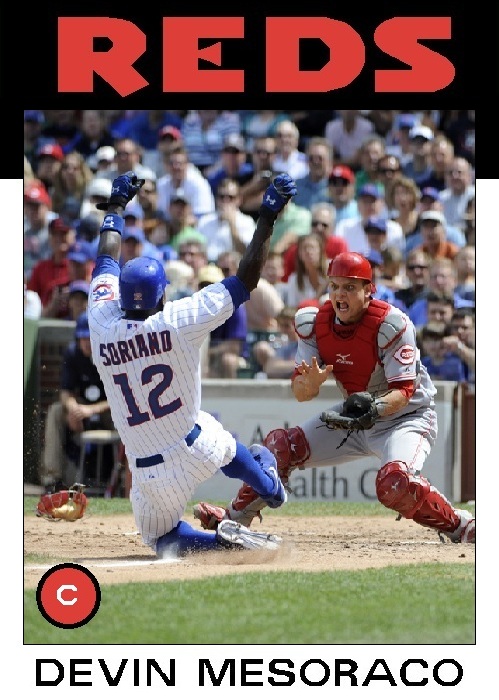 God I love that photo.


Thanx for reading.
Posted by hiflew at 4:08 PM