Since I got my scanner yesterday, I have been rather excited about the blog because it gives me more I can do.  I have enjoyed writing about the Hot Stove League and other stuff the past few months (and I will continue that as well), but as a card blog we need some pictures.  I got several small envelopes in the mail today from my minor eBay binge with my tax refund.  Here are the few that arrived today.

Here is the first 2012 Topps card to be shown on my site.  It is an interesting photo of probable utilityman Jordan Pacheco with the Bryce Harper-like eye black.  It does look like he has been crying though and as Tom Hanks said.

Up next is a red parallel from the 2005 standalone Topps Turkey Red set.  I guess that would make it a Turkey Red Red.  Okay so that joke was awful, but the card looks nice with the colored border but it does lose its throwback appeal.

Here is a 2011 Topps Tribute gold Carlos Gonzalez #'d to 50.  It is the 4th CarGo I have out of the 6 possible, and realistically it might be the last.  The ones I am missing are the #'d to 10 black and the 1/1 red.  I really like rainbow sets such as 2008 Upper Deck Heroes and Bowman to an extent.  I would never buy a box or even a pack of Tribute because of the cost, but I have no problem buying the Rockies on the secondary market from disappointed speculators.
One thing I really like about a small number of eBay sellers is when they use actual cards as packing material for a card you bought.  This was the case with the final purchase of the day.  These eight cards were included and the first seven are really nothing unexpected for "packing material", basically just some random Bowmans although they are still nice cards.

But the eighth was quite unexpected.

A 1982 Donruss Rickey Henderson Diamond King in beautiful condition (possibly even gradable if I was into that sort of thing).  I could have easily seen spending 50 cents or so on this card, but I probably never would have bought it.  Now I have it and it my first "first" Diamond King.  Bonus!


Now for the grand prize (well grand for me anyway) that those cards were protecting. 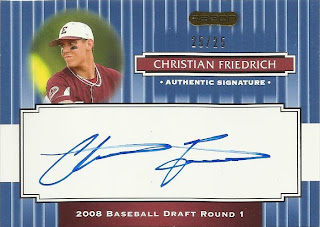 A 2008 Razor Signature Series Christian Friedrich blue autograph parallel #'d 25/25.  It is my 39th unique Friedrich and I do love that EKU uniform he is wearing.  Some of you guys that went to big schools are a little spoiled, because before Friedrich went in the first round Eastern Kentucky's best major leaguer was former Padres reliever Gene Walter.  I hope Friedrich can at least top Walter's career and to do it as a Rockie would be icing on the cake.
Posted by hiflew at 5:41 PM

Congrats on the scanner. Any extra cards for free are cool.