Chris over at Nachos Grande held another group break last month and I jumped in because most of the sets being busted were very sparse in my collection.  It was a one chosen team, one random team style break.  I of course chose the Rockies and was randomized the Blue Jays.  I ended up trading the Jays for the Rangers because I was low on trade bait for that team.  I don't think I have ever made such a good trade as you ill soon see.

Let's start out with looking at some Rockies from early in this century.

Here is a pair from 2002 Fleer Genuine.  I hadn't ever seen this set, but I gotta say I kind of like it.  I like most sets with colored borders though.  I did complete this team set.

Here is another Fleer offering from 2002.  This one being 2002 Fleer Showcase.  I am not as big a fan of this particular set.  It just seems kind of blah even with the colored border.  I don't like duplicate pictures on cards especially the ghost-like close up behind the main photo.  I ended up missing two for the team set here.

Next up is 2003 Donruss Team Heroes.  Numerically, this was my most successful box in that I got 5 cards I needed.  This set is okay, but I am not really a fan of the odd-shaped polygon that is used for the photo.  I still need 6 cards to complete this team set.

Next up is 2003 Flair.  I usually enjoy most Flair sets, but I think this may be the worst looking Flair set I have ever seen.  Once again the photo is duplicated (and smooshed) at the top.  It is sort of reminiscent of 1994 Upper Deck or 1996 Topps.  With this team set I am missing one short print, the Clint Barmes rookie.

2003 Upper Deck Patch Collection is next on the agenda.  I like this set even if it is sort of a common style.  I enjoy all of the information that is shown on the front, especially uniform numbers.  The pinstripes at the bottom and top definitely scream baseball set.  The one downside with this set is short prints are randomly strewn throughout the set.  From my team set, all I am missing is one SP, Jason Jennings.


There was one other box opened, 2004 Topps Cracker Jack.  I didn't get any base card I needed from this set and I remain 1 short.  I did get one parallel from that box that I needed though as shown below. 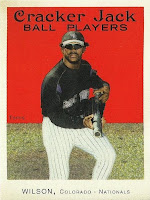 The Preston Wilson is a mini sticker from the 2004 Cracker Jack.  It is about the same size as the 75 or 87 minis.  From the Fleer Genuine box I also got a Genuine Leaders Todd Helton insert.  I really don't like when a set repeats its name in the title of an insert set.  When I type up my want lists, I feel really weird typing Fleer Genuine Genuine Leaders.  Couldn't they just call it Leaders?

My good luck with the Rockies was not yet over as I also got two serial numbered cards.  The Rene Reyes from Genuine is one of those numbered rookies (#'d to 2002) that lots of sets put in at the end of the base set in the early 2000s.  It's good if the player turns out to be successful.  It sucks to have to pay a premium for a guy like Rene Reyes 10 years later just because the card is short printed.  The Larry Walker is from Showcase and is a Legacy parallel #'d 143/175.  It is always nice to pull a card #'d that low, because 10 years later they are really hard to track down.

I also got a hit for the Rockies, well sort of anyway.  This Ryan Cameron is from UD Patch Collection and is one of 10 manupatches of rookies numbered 151-160 at the end of the 150 card base set.  One of those 10 is inserted in each box, so I feel a bit lucky there.  Where I don't feel lucky is, I already had this card.  This is a first for me, I had never gotten a duplicate hit from a break before.  I guess that means my team collection is starting to get impressive.  Eric you have first shot at this one since it fits two of your criteria for a great card.  Too bad Cameron looks to be about 12 in the photo (which scanned poorly) and can't quite grow a mustache yet.

Here is some of the selection of Rangers that I picked up which are currently en route to Brian from Play at the Plate.  I never knew Ryan Ludwick started out with Texas.  I am sure Brian will love the Will Clark that was pulled as well.  I definitely know he will love it more than me because I still get nauseous whenever I pull a Nuschler card.

Here is another trifecta of Rangers.  I still don't know why Texas hitters don't get nearly as much crap as Rockies hitters.  The Ballpark at Arlington is just as good (if not better) for offense as Coors.


AND NOW FOR THE BIG HIT

From the Donruss Team Heroes box, I got this Mark Teixeira autograph #'d 48/50.  What an excellent pull and a really nice looking signature.  I love it when players include their number in a signature.  Brian had gotten the Rockies as a random team in a group break of his own and I traded him the Rangers for them BEFORE the Teixeira was pulled.  He is still getting it because my word is good and I am glad that it is going to the biggest Texas fan I know.  This one was a bit harder to let go than say a Palmeiro jersey or something though, but like I said I'm glad it's heading to Brian nonetheless.
Posted by hiflew at 7:18 AM

Don't you just love it when your alternate teams gets the hit! BTW it's cool of you to send the card to Brian...you're a good guy hiflew!