I consider the Oakland A's to be the team with the overall best photos from top to bottom in this set.  Normally the A's stand out just because of their unique uniforms, but I have never thought of the A's as being particularly "cardogenic."  I have thought the Cubs usually had great cards, due to the ivy.  However, as much as I hate to say it, the Dodgers are usually the team with the best photos in an average card set.  Are there any teams that have caught your notice as being a "cardogenic" team?  Think about while checking out some great photos from the second half of the Oakland A's.

What is there not to love about the Adam Rosales card?  There is the great catch while falling into fans, the look of terror on the kid's face, the random arm from the side to catch Rosales, the old guy pretending to catch something but doing nothing, and the large colorful cup (or is it a horn?).  Just a great photo.  On 25 other teams, the Cespedes card, which is reminiscent of the old Pinnacle shades cards, would have been #1.  The mirrored glasses give you a picture in picture effect that I just love.  You can't really call the Jemile Weeks card a "double play card" because he didn't throw the ball, but it is still a great shot.  The Josh Reddick card is another nice throwback uniform, this time featuring the old minor league Oakland Oaks.  Finally, The Kila Ka'aihue card features an under-represented aspect of card collecting, the chase card.  I like cards of baserunners being chased by either defenders, or in this case, teammates.

The A's also brings us the 6th manager that was also featured in 1986 Topps, Bob Melvin.  '86 Topps was actually Melvin's rookie card.  Here is his side-by-side for comparison with his youthful self.

I will close by showing off a larger shot of the Adam Rosales card which is just fantastic. 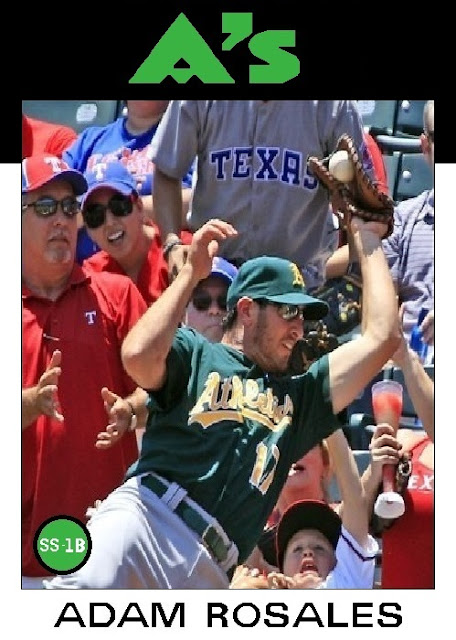 The kid in that shot is hysterical.

Back in the late '70s (specifically '78 and '79), the Yankees -- ick -- were a cardogenic team because most of their photos were action shots while other teams were still stuck with posed shots.

Since then I haven't really noticed.