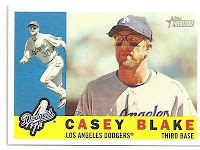 The Rockies finally remembered that there are bases in the infield that need to be covered by signing veteran free agent third baseman Casey Blake.  Blake was signed to a one year deal that could be worth $3 million dollars.  The contract is non-guaranteed.  Blake is a former Dodger (among other teams) and had really good years in 2009 and 2010.  He should step in as, at the very least, a competitor for the starting third base job.


MY THOUGHTS:  This is basically akin to trading Mark Ellis for Casey Blake since LA signed Ellis earlier in the offseason.  I like this move a lot, because firstly since the contract is non-guaranteed if Blake can't hack it, it's not an albatross for the year like Ty Wigginton last year.  Second and more importantly, Blake is precisely the type of third baseman Colorado needed to find.  He's older, has produced in the past, and can be easily discarded should Nolan Arenado tear up big league pitching in Spring Training.  This will probably also finally put the Martin Prado / Seth Smith rumors to rest, unless the Rockies plan on trying to trade or release some combo of Young, Nelson, Herrera, LeMahieu to make room for him at second.  I am very happy this morning that the 2012 team is starting to take shape.


BTW:  Don't forget to vote at the top of the right sidebar for the catcher for the Rock Stars team if you haven't already.  Thanx for reading.
Posted by hiflew at 4:31 AM

Before the whole Pujols and CJ Wilson signing blew my Angels Winter wishlist apart, I was hoping the Angels would sign Blake. I think he's still got plenty of good baseball left in him. Make him an early pick for Comeback player of the year.

As long as Jamie Moyer stays retired, there's no one older than me anymore! Wakefield is oldest now, and I'm a few months older than him.