As I said in the past, I LOVE group breaks, so I decided to create a nice little form for posting the results.  After last month's poor results from Thorzul's break I had three options.  One, slink away with my tail between my legs...not even really considered.  Two, buy the Rockies and hope for the best...considered.  Three, buy the best team available and trade for the Rox as my second team.  I decided on option three and double secret option four.  We'll start with option three, the Mets were available so I popped hoping someone would trade me the randomized Rockies later.  Double secret option four was to double down and purchase a second group of two teams.  After some research on the boxes being broken I chose the Royals hoping for a nice George Brett.  I was randomized the Pirates and Tigers and flipped (luckily as it turned out) the Tigers to Ryan G. for the Rox (that have 0 cards in the 2005 set, so an easy trade).

So my teams for the break ended up being (with projected rankings)
1. Mets
2. Royals
3. Rockies
4. Pirates

That was the order I expected the loot to shake out...Oh how wrong I was!  Because what followed is my greatest group break victory EVER. (which you can see later)  heehee

I will start with the team that finished 4th in my final rankings, my Rockies

I picked up 5 Rockies out of the Elite box and 0 from the other which was no surprise as mentioned earlier.  These cards are really good looking, but you just about need to wear white gloves when handling them to avoid fingerprints.  I  got every Rockie from this set now minus two short print rookies of Jeff Baker and Garrett Atkins. I got the 4 needed cards (Jennings is the dupe) to finish the base team set for my Rockies and they still finished 4th.  Are you starting to realize how great this break was for me?

I only got two Royals in both boxes combined, one from each...Let's take a look.

Eh, nothing special here, so how did this team beat the Rox?

This is how.  A George Brett gold parallel #'d 166/500.  Not the $150 Brett autograph I was hoping would pop from the box when I chose the Royals, but very nice nonetheless.  I am not a book value junkie by any means, but for this I will share what my 2007 SCD says the cards are worth.  This Brett books for somewhere between $6-$12.  Not too shabby.

I am only showing one of the 3 Met base cards I got.  I also got Roberto Alomar and Al Leiter.  This is around Glavine's first ever Met card in uniform (odd that they had Jose Hernandez in his Brewer uniform, but they got a Glavine in spring training pic).  The base card I got from the 2005 box was of manager Davey Johnson, like I said very little.  But let's check out the serious 2003 mojo that some of you traders may go apeshit with your offers over.

A Hideo Nomo Throwback Threads jersey patch #009/250.  And what a patch it is!  The thing I loved about older Donruss (and some Fleer) relics was the picture of the actual item cut up on the back of the card.  This 4 color patch (a little blue in the extreme right) appears to be taken from the name possibly between the N and O.  This card help me forget that with the Mets in this break I got cards of both pitchers to ever no hit the Rockies, Nomo and Leiter.  Hmm, well I didn't forget it, but I am okay with it.  In case you are curious, 2007 SCD books this card at $20.

Yep, Aramis Ramirez used to be a Pirate, before the Cubs absolutely stole him (and Kenny Lofton) at the 2003 trading deadline for I think a bag of balls.  Actually they were traded for Jose Hernandez (seen above) who the Rockies had dumped on the Cubs earlier in that summer.  I also got Kenny Lofton and Josh Fogg from this set.

Sweet, my first Roberto Clemente card that I remember owning.  Strike that, I had the 1982 K Mart reprint, but this is my first non-reprint of Clemente.  I have always loved the Pirates color scheme and it works well on this card design.  How good is this that my first Clemente card is only the 3rd best Pirates card received?  SCD book value $4.

A gold version of the only early 90s Pirate that I did not despise and the Pirate colors really work well against the gold background.  I was a fan of Van Slyke in his early time with the Cardinals as well.  This card is numbered 177/500 and being a collector from the mid 80's I think this might be the 500th Van Slyke card I have owned at one time or another, but it really brings back some good memories which ups its value to me.  SCD book value $2-$4.

AND NOW THE BEST CARD OF THE BREAK 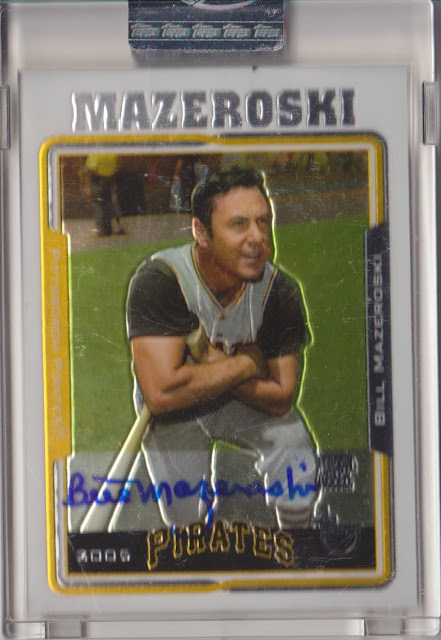 TAADAAA!!!!  How great is that card! An uncirculated, on-card autograph of Bill Mazeroski, hero of the 1960 World Series defeating the damn Yankees.  This card is not numbered, but I don't care.  There could be 8 billion of these floating around and I would still be happy, well maybe not 8 billion but you get the idea.  For 33 years he was the only person that won the World Series with a walk off home run (I hate that ESPN term, but it works here) and now I have his autograph.  When I watched the video break I didn't stop smiling the rest of the day.  I would like to formally apologize to all the other participants in this break for hogging all the best cards, but my loot sucked last month so maybe it will turn around for you next time.  BTW, in case you are curious the SCD book value on this card is $45, but it's worth more than that to me.

Thank you to Thorzul for hosting this break and I see absolutely no reason to not join you next time.  I spent $42 bucks on both slots and got around double my money's worth in cards, not a bad investment indeed.  I just about know for a fact I couldn't have gotten all of these cards on eBay or from a shop for $42, so I am just thrilled and I also apologize to the next group break (Sorry, Jon) I post because it couldn't possibly live up to this one (it's like being the guy that took over at UCLA for Wooden).
Posted by hiflew at 3:19 PM

That Nomo patch is tremendous.

Really awesome Nomo card. That is a sweet paycj.

Nice haul, If you are interested in moving that sweet Nomo, I have some Purple Goodies I can offer.