Welcome to the latest edition of The Rockie Trading Post.  Tonight's special returning guest is David (aka Rhubarb Runner) from e rayhahn rayhahn.  David is making his second appearance on TRTP having previously appeared on episode #7.  In case you have forgotten, David loves the Twins and has such an extensive collection that it is sometimes hard to find something he needs.  I hope my Rockies collection gets somewhere close to that eventually.  This post is actually a 2 in 1 trade post because I hadn't gotten to posting about one trade before we had a second completed and received.  Yes I am a tad bit behind.  Anyway, I sent a Harmon Killebrew Goudey mini from my Spastikmooss draft (yes, him again) and a few Heritage cards and in return I got these new beauts.  Let's take a look.

The star of the first package from David is this short printed Troy Tulowitzki.  Tulo seems to get short printed every year in Heritage.  When David sent this card I needed it for my set, then I pulled another Tulo out of my final retail box.  That works out fine because now I have one for my Rockies binder also.

David also sent me several cards for my Opening Day master set.  My goal is to have this set completed including the blue parallels and autos by the All Star Game.  I think I have a pretty good shot at it.

Here we have more Opening Day.  The two Rockies are going to my Rockie binder.  I am now just a Carlos Gonzalez away from having a 2nd card of each Rockie for the team set.

Next we have a sort of blah photo of Seth Smith from 2009 O Pee Chee.  This stands out because Smith and Eric Young Jr. are usually the best Rockie photos in most card sets.  Also included was my first gold parallel from 2008 UD Documentary.  I don't know what it is about my luck, but nearly every card I have from this set is from a Rockies loss.

A couple more Documentaries featuring losses to the Dodgers.  Colorado was just shy of splitting the season series (8-10) with L.A. in 2008, I think I have a card from nearly every Rockie loss vs. L.A. in this set and none of the wins. 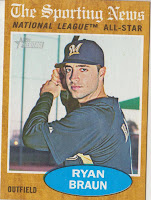 This is the second trade package that arrived from David.  It was a small Heritage trade of Twins for needs.  The Ryan Braun completes my NL All Star team which was not short printed.  My goal on the Heritage is to have it (including high series) complete by the end of the year.  I love this set so much.  I am sort of glad that a lot of bloggers are kind of turned off by the head shots or simple photography in general.  That means better chances at short prints for me and more easily available cards during trades.

Thanks again David for the trade and I hope my 3rd trade package has already reached you by now.  Check out his blog here for some super sweet Twins knowledge along with other great stuff from this Renaissance man.  Well that just about wraps up this edition of The Rockie Trading Post, but before we go I have one bit of news regarding TRTP.  I am BEHIND in these because of all the great traders out there in blogland.  I am sticking to my belief that every trader deserves their own post/plug, so I will start an upcoming editions on the sidebar with a link to each trader's blog since it might take a little while to get your trade posted here.  Sound good?  Tune in next time for a first time visitor to the Quarry from Orioleville.  Until then, we are officially signed off.
Posted by hiflew at 4:40 PM

there is a really good chance your package has arrived by now; while here in Omaha again on business, my wife informed me that FOUR packages arrived in Monday's mail

thanks again for the trade!