Earlier this week Tim (aka Spastikmooss) over at The Great Sports Name Hall of Fame held a draft from his trade bait.  There were six of us that bought in and I gotta say it was a blast for me, a much better time I would've had watching the Oscars that night.  I ended up drawing the 6th and final draft position, which was not really that bad because I still got what I wanted for the most part.  And the best part was since it was a snake draft, I got to pick twice back-to-back and spend a lot more time checking the lists for my next picks.  The first few rounds of the draft were dominated by relics and autos and a few vintage cards.  There weren't any Rockies or anything else that I particularly wanted for myself so I decided to draft for others in the beginning and work out some trades later.

I was undecided on whether to make this a Rockie Trading Post (I didn't really trade for them) or a group break results (nothing was broken aside from Tim's computer) or what, but I think just a simple I got these cards post will work.  Let's see what I got for my minimal $10 purchase shipping included (a whole lotta pics).

My first two picks were these beauties.  My first rounder was this 2003 Upper Deck Headliners Roy Halladay jersey that I got for a trade that is brewing with Julie from Things are Funner Here.  Hopefully she needs/wants it.  My second pick was a 2001 SP Game Bat Milestone Edition Roberto Alomar bat card.  It is currently offered to Jack the Baseball Dad from All Tribe Baseball.

My next two picks are honestly the last two I remember the exact order for and after I got them in I realized how Cleveland heavy my top of the draft was.  First up is a 2002 Gridiron Kings Tim Couch jersey from the Browns numbered 384/400.  It is for trade, but since I collect UK basketball players it wouldn't be completely out of place in my collection either.  Then we have my oldest non-buyback card ever a 1965 Topps Chico Salmon in surprisingly great shape.  I never have collected much vintage, even as a kid I always preferred them no older than me.  This one I am definitely keeping. 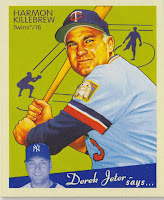 The next up is a 2006 Jay Cutler rookie card.  I am neither a Bronco fan nor a football collector, but I am a HUGE Bears fan and I spotted a rookie of the starting QB and I jumped at it.  The 2008 Upper Deck Goudey Harmon Killebrew is a red back mini that I had spotted on David's (aka Rhubarb Runner) want list over at e rayhahn rayhahn.  I have one card that he wants set aside for him and this one is going to headed to him as well if he still needs it.

I also picked up this 2008 Topps Co Signers Scott Kazmir / Matt Garza card #'d 28/150.  I never really understood the whole concept of Co Signers, because to me this is a Scott Kazmir card with an unecessary image of Garza on the front.  If you just saw the back you'd have no idea Garza was even a part of the card.  This card is for trade. 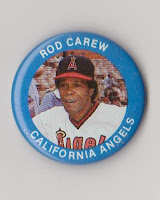 Up next is a 1984 Fun Foods pin of Hall of Famer Rod Carew.  A total of three of these pins went in the draft with the others being George Brett and Rickey Henderson.  After seeing the pin in person, I remembered having a bunch of these when I was eight or nine years old.  They went the way of the rest of my childhood collection, to unknown oblivion, so it now one of The Pins my Momma Threw Out.  I couldn't leave the draft without picking up one of the several cards of Fred McGriff, Baseball Superstar available.  Tim and I share the Crime Dog as our favorite player.

These two were an added bonus to the draftees.  These two 1981 Topps cards were a former bipping to Tim and he sent each of the six of us one copy of each.  I don't know about everyone else, but I actually needed them for my budding 1981 set.  Thank you for the extras and the A's colors were probably my favorite of the '81 set.

Heading into the draft I knew beforehand there were 15 Rockies that I needed from Tim's lists, we all got to pick 25 cards so after the 9th round I knew I needed to start on my Rox.  My favorite of these three is the 1994 Leaf Gold Leaf Rookie Marcus Moore.  I discovered during the draft chat that I had accidentally become a Marcus Moore supercollector since I have pretty much every card ever made of him as a Rockie.

Up next are two players that I had 0 cards of as a Rockie.  I was surprised I didn't have a Kirt Manwaring.  Some of you may be aware that one of my goals this year was to collect one card of every Rockie that ever played a game in the proper uniform.  If you were not aware here is the link for my Mountains to Climb in 2011.  I am at nearly 50% completion with 190/412 total players.  Once I hit the 50% mark or so I will put up a want list for the rest some of which I don't think ever had a Rockie card made.

Two draft pick cards are up next.  Unlike most draft pick cards, both of these guys actually made the majors and had varying degrees of success.  Francis had the greater success of the two before he got brought down by injuries and is currently a member of the Royals.  I hope he has a nice comeback for an up and coming team.

I got a few more cards from the 1997 Circa set, which I have previously identified as perhaps the ugliest set of all time.  My opinion has not changed, although I still want to knock out the Rockies team set.  I have 7/14 Rox before putting this team set out of its misery.

A pair of 1995 cards are up next including the 1995 Fleer set that I consider the second ugliest set of all time.  Just remember some of these horrible mid 90s designs the next time you are upset by the Topps monopoly.  My favorite of my Rockies selections is the 1996 Skybox E-XL Ellis Burks red border.  I have one of these of Jamal Mashburn, but hadn't seen a baseball player until now.  The border is a felt-like material that is very nice.

My final two needed Rockies were more recent.  The 2011 Ubaldo Jimenez base card puts me at 3 for this year's set.  I haven't been pursuing the 2011s very hard at all.  The 2008 Upper Deck X of Troy Tulowitzki is actually quite nice.  I never bought any of this set, but the word around Blogland was it was a very disappointing product.  I sorta like it.

Finally we come to the BEST CARD EVER.  Since I had the last pick of the first round, I knew I would have the honor of picking Mr. Irrelevant.  I searched the lists and came with the perfect card to honor the host of the draft, Spastikmooss.  A 1997 Beanie Babies Chocolate the Moose of course.  I wonder if Kidstuff will give me a discount or sponsorship fee for publicizing their website and fax number (Eh probably not).  I am going to keep this card in a place of honor as a nice remembrance of my Oscar night draft.


Boy, that was a long post, but well worth it.  I definitely think I got my money's worth out of this draft and I hope they catch on with other bloggers.  Check out Tim's site here and trade him some cup and cooler cards.
Posted by hiflew at 5:17 PM

Nice write up! The piece about the computer crashing definitely made me lol, and I'm glad that my 81 doubles helped someone out! I've still got like 10 of each hahaha.