I got back from work today to find that my 2011 Topps Heritage retail box had arrived.  I am so looking forward to this set, because I love the 1962 design.  It is probably my favorite design of the 1960s, although 1965 is a close second.

I am planning on buying 3 boxes of Heritage (plus one high #s when it comes out) this year, because one of my Mountains to Climb in 2011 is to get this set completed.  I had a choice to make, $90 for a hobby box or $70 for a retail box plus shipping of course.  Since I have very little interest in any of the hobby exclusive inserts, saving the extra seemed to be the no-brainer solution.  I got one box off eBay and if it works out well I will buy the other two as retail also.  If not I will get 2 hobbys a little later.  Let's see how this box goes.

24 packs 9 cards per...I am not going to list every single card, just the highlights

I don't dislike Halladay or any of the Phantastic Phour (better nickname than the silly R2C2) except Hamels, but I liked him a lot more when he was in Toronto shutting down the Yanks and Red Sox.
THE HIT

David Wright with a solid BLACK jersey.  You don't see the solid black jerseys that much let alone on the Mets (or maybe YOU do but I don't).  This is much better than the two Clubhouse Collection cards I got from the 2008 set, which were the last boxes of Heritage I bought.  Greg Zakwin collects Wright and displayed a lovely Troy Tulowitzki card a few days ago.  Me thinks we have a nice trade here.  If for some reason Greg doesn't want it, I'm sure someone will.  HINT: rhymes with DJLenny.

Woohoo, aside from the Ubaldo Jimenez, this was the Chromie that I wanted most (no, not the Chris Johnson).  TWO Rockie great floating heads + two players that aren't Giants or Dodgers...can there be a better card?

YES, the box is working out pretty good.  Getting one of the 3! Rockie short prints (Street and Tulo AGAIN are the others).  Actually, Card #441 (JDLR) was listed on the sell sheet as a checklist.  I am happy it wasn't.  I am on the fence on the team cards, I sorta like them but it looks like the front row is sitting on air, weird.  I LOVE the floating head rookies, although I don't think there is a Rockie in there this year.  Maybe next year with Friedrich, Matzek, and Rosario.

This year features the usual suspects as inserts in Heritage.  They look pretty good, but maybe a new idea every now and then could work.  I do love getting another JFK card though.
ROX IN THE BOX

Only two base Rockies were in this box.  Normally I would be disappointed, but with the shortie and shiny Rockie I am okay with this.  Todd Helton is three years older than me.  Why is he not losing his damn hair?  I like the design of the All Star cards as well, the NL were not short printed, but the AL were.  Odd.

I got 5 of the rookie "cup" cards, although calling these cups is stretching it.  Rookie trophy cards would seem to fit better, but I am sticking with cup.  I like the two red gloves on Garcia and Feliz, nice and different.

ONE I WAS SURPRISED I LIKED 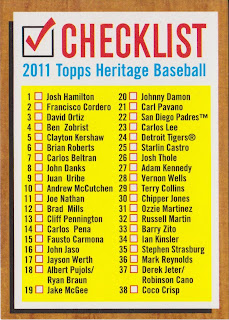 Yep, I like this checklist card.  The best part is these are not part of the set or considered as an insert.  They are just randomly thrown into about every 1 in 8 packs.  I got cards 1, 2, and 6.  They really remind me of being a kid, plus these are a thousand times better than putting twice as many checklist cards in a set but only using the back.
Overall, I am thrilled with this retail box and will buy two more without a doubt.  Save $20 and miss out on what a chance at a coin card or some stamps.  I can always use the $60 to buy whatever Rockies (I don't think many) are in those hobby exclusives and with the leftover buy another box (or two) of something else.
Posted by hiflew at 7:02 PM

Well, that was quick and easy.

I'm interested to see if you pull anything else that would entice me.

You aren't last. I haven't found these in NYC yet.

@Greg I told you you would like it. And we have met many times (I think the count is somewhere around 100 times now) but always nice to meet again. And this is 2nd time he brought a bat with him.

@AJ There are still not here and probably won't be for nearly a month if the pattern holds, this was all eBay.

That is a nice Wright jersey. Looks like you got a good box. I'm sticking w/ blasters and rack packs right now since it's all I can afford.

Halladay is really the only member of the Phillies that I like. I'm glad he got the wrapper instead of Utley, Howard, Lee, etc.