One thing I definitely wanted to include in this set was the four paneled rookie cards.  The original 1977 set featured the rookie cards of Andre Dawson, Dale Murphy, and a whole lot of lesser known names.  I appreciate the big names, but I love the guys that most people forget.  My challenge here was that since I was making a regular card of every single player that played in the big leagues this year, what would be the purpose of the four paneled cards.  I came up with an answer, why not go with prospects.  But not just any prospects, 40 man roster prospects that did not make the majors.  While there are a few top notch prospects listed here, most of these guys just had bad years (or injured ones) and might never make it.  I'm okay with that, because I am one of the few collectors that appreciate the fact that John Scott was taking up space on the Andre Dawson rookie too.  Let's take a look at some of the potential rookies of the 2014 season. 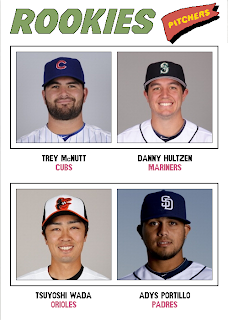 Current status
Trey McNutt - 23 - Spent 2013 in AA for the 4th straight year...currently off the 40 man roster
Danny Hultzen - 23 - Top prospect that made it to AAA but is likely out for the 2014 season
Tsuyoshi Wada - 32 - former Japanese League pitcher played in AAA...released after the season
Adys Portillo - 21 - spent his 4th straight season in Low A...injured most of 2013 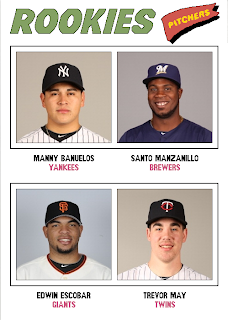 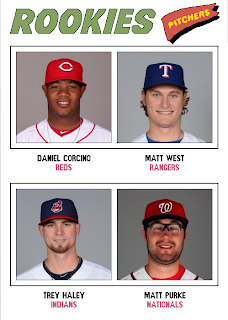 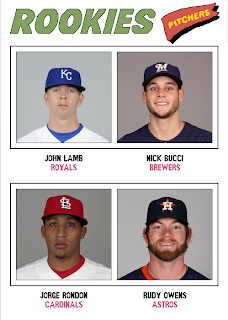 Current status
John Lamb - 23 - former top prospect struggled in his jump to from high A to AAA
Nick Bucci - 23 - missed most of 2013 with shoulder injury...currently off 40 man roster
Jorge Rondon - 25 - hard throwing reliever that was decent in AAA in 2013
Rudy Owens - 25 - acquired in Wandy Rodriguez deal...missed most of 2013 with foot injury 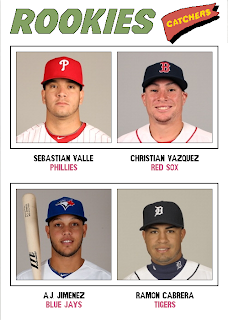 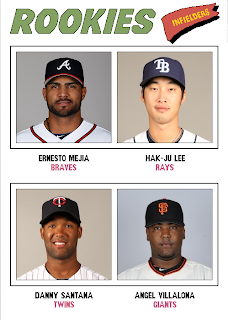 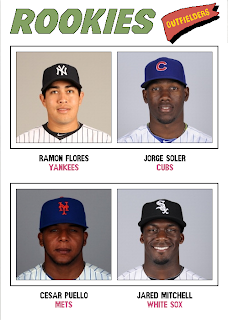 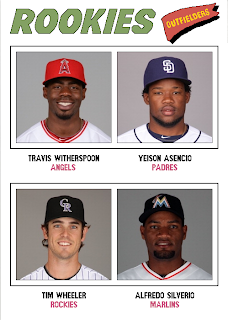 Only time will tell if there is an Andre Dawson-type Hall of Fame career in these 32 players.  It is highly unlikely, but still possible.  The odds are with a handful of these guys being successful big league players in 5 years, but the odds are also with half of these guys being completely forgotten in a year or two.  That is what is both great and frustrating with all prospects.


Thanx for reading.
Posted by hiflew at 5:25 PM

These look great! One of my favorite multiplayer rookie designs for sure.

That's really digging up a bunch of guys I've never heard of.

I hope some kid doesn't come along and cut those cards up into fourths (like I did).