Prelude to the 2012 Quarry Unlimited set 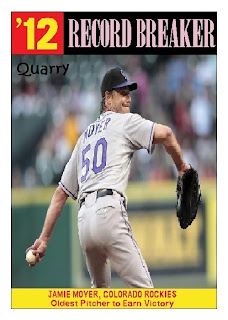 A few days back I made an announcement of a comprehensive 2012 custom set featuring every person that played in the majors during the 2012 season.  As shown in the title, it will be called 2012 Quarry Unlimited.  Today I will begin showing it off, well somewhat.  This is going to be more of an explanation for how it's going to work along with the single card above to whet your appetites.

1. As some of you may have figured out from the Jamie Moyer above, this set will be based on 1986 Topps.  I ranked that set #1 on my Best Topps Set Countdown not because it is the best design, but because it is my first and favorite set.  Honestly, I am also doing it because it is also a relatively easy design to replicate.

2. I will be presenting the players by team in a 1-30 order of my feelings toward said team.  I have never done an MLB team countdown and I figured this would be a better way of doing it that just a dry listing.  I will be starting at #1 and working my way down since #1 is not really going to be a surprise to anyone.

3. Because of the sheer amount of players involved (between 39-57 of each team), I will breaking the teams up into two posted in back to back days.  This should take us through the winter dry spell of cards and finish up shortly before 2013 Topps is released.

4. Before I get to the team sets, there are a couple of subsets that I created as well that I will be showing first.  The two subsets are All Stars and Team Leaders.  They will also be in the style of 1986 Topps.

5. I will only be presenting card fronts in this project.  I would have loved to do card backs as well, but the fronts took two months to finish, because I was being OCD-style through.  I just couldn't see putting any more time into it.  I didn't just scan and cut and paste, everything was either drawn from scratch or redrawn for coloration purposes on MSPaint.  I also didn't type the player's names, I cut an alphabet from actual 1986 Topps cards and manually cut and pasted each name.  Needless to say it took a while and card backs would probably take twice as long.

6. DISCLAIMER: These cards are not made as a collectible.  They are nothing but virtual fun.  I do not claim to be the owner of the photographs or the design, I just played around with them.  I will not be making these into actual physical cards, because there would WAY too many legal hoops to jump through.

7. I really hope you guys enjoy this, because this will probably be my biggest contribution to the community ever.
Posted by hiflew at 6:23 PM

Looking forward to it!

I have no patience for online card creation, and when I do try it, I instantly reach for the '86 Topps template because it's pretty simple.

That said, I can't imagine doing what you did.