Hey guys, unfortunately the end has come for another fairly successful Quarry Group Break.  We aren't done yet though.  There is still the unfinished business surrounding the excess SkyBox Dugout Axcess cards.  After everyone got their single cards which consisted of an entire base set and an entire Doubleheaders set, we were left with the following.

Sorry for the approximations, but I packed them before I counted them.

I have already ran two randomizations, one for base and one for the Double Headers.  Each and every team was eligible for both.  I randomized three times and got the following.

First up the base sets 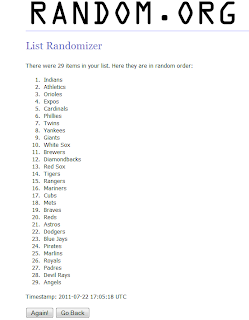 Congratulations to the top three.  The Indians get the largest set, the Athletics get the middle set, and the Orioles get the small set.  That worked out great since all three teams were sort of middling at best in the break.

Now for the Double Headers 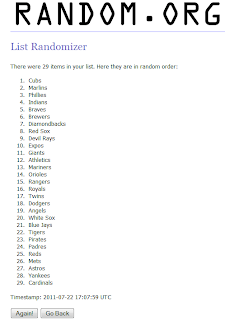 The Cubs and Marlins will get the full sets and the Phillies will get the partial.  Congratulations to all winners.  And to the winners of the partial sets, I hope I have given you a new addition to your want lists.


I have had fun with this break.  Sure we didn't get an Eisenhower relic like last month, but we got some cool cards this time.

The top 5 cards of the break (IMHO) 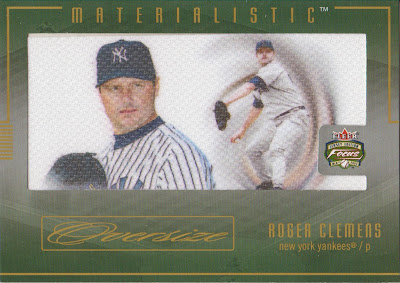 #5 2006 Flair Showcase Derek Jeter Legacy Blue parallel #'d 047/150
Not a bad haul indeed and that's not including several other jerseys and autos.  I hope you guys had fun and come back next month for another inexpensive break.

I will not be giving hints in the mail for you guys as to boxes next month, because frankly I don't know yet.  I have some ideas though and I already have one box in hand.  So I will tell you now.

One box for next month is:

Hope to see you next month and my non-winning Gint-a-Cuffs box will start tomorrow right here.
Posted by hiflew at 10:14 PM

Thanks for another great break! I will be sure and join again next month!