Welcome to the second edition of Monday's Mailbag, but the first that actually is posted on a Monday.  The weather seems to have turned in a good way.  Most of the ice has melted and it has revealed all of the tree damage that will need to be cleaned up.  It's not too bad, some of my neighbors got it much worse, so all in all it could have been much worse.  Everyone has their health and for now according to the forecast it appears that spring is coming early.   But no one came here to read about the weather, let's talk cards.

Before I start showing the first half of the large mail day that I got today, I would like to let everyone know that I was able to get packages and PWEs mailed today.  Between Sportlots purchases and blogger trades, I mailed out 8 PWEs and 2 yellow pads today.  And those are just last week's stuff.  I still have a few more PWEs to get ready later this week.  But that's later, let's look at some of the stuff that is now part of my collection.

We'll start this week with a visit from madding from Cards on Cards.  That PWE was actually delivered on Sunday.  Mail was only delivered on Wednesday last week, so they worked on their usual day off.  Kerry have traded many times on my original blogging run, but this is the first since my return.  I sent him some Cardinals that he claimed on the Sunday PWE Trade Bait posts along with a #'d Trail Blazer and in return I got these.

We'll start off with the Rockies portion of the swap.  First up is the 2020 Topps/Update Royal Blue parallel for reliever Phillip Diehl.  Those Royal Blues are incredibly overpriced on the secondary market, especially since 2020 Update was among the worst sets ever, so it is nice to knock one off the want list.  The Chuck Nazty is from 2020 Stadium Club Chrome.  I like the set, but so many sets came out in October and November that it was just hard to keep up with everything.  I still need around half of just the Rockies base cards from that set.  Next we come to a Trevor Story from 2020 Topps/206.  That was an online only set that I was debating on even including on my checklists.  I do not include most online-only sets at all.  I'm just not a fan of the practice.  I do have a couple of exceptions to that rule, but if it say "Now" or "On Demand" it is probably not something I am looking for.

The rest of the cards from Kerry hit other parts of my collection.  He and I are among the few bloggers that also collect basketball cards.  He is a big Portland Trailblazers and Oregon Ducks collector, whereas I collect Kentucky Wildcats alumni regardless of team.  Kerry sent this pair of needed Donruss Rated Rookies.  The Hamidou Diallo is a parallel from the 2018 Donruss set.  Diallo seems like he is in the midst of a breakout year, which means I need to pick up his rookies before prices go up.  Speaking of prices, we come to Tyler Herro.  It took me nearly a year to get this simple base card from 2019 Donruss.  Herro is just overpriced and has been since the Heat went to the Finals last year.  Hopefully he gets traded to a bad team soon so his prices will start to fall.  Finally we come to the first 86 insert in hand for me.  I don't even mind that it is a Giant because I just love the set.

Next up we are joined the now full grown adult Nick from Dime Boxes.  Nick just celebrated his 29th birthday which just stuns me.  I first traded with Nick when he was still in high school and I guess I still think of him as a teenager.  Okay, I'm old.  Nick claimed a Ben Zobrist Rays refractor of mine which I sent along with a few set needs.  The cards Nick sent have a lot in common with the cards I got from Kerry.  Up first is Phillip Diehl again except this one is from 2020 Topps/Update Chrome.  Nick also sent me a tobacco card from 2020 206.  He sent the now former Rockie David Dahl.  Just like that, I now have 40% of the Rockies team set.  I guess I will go ahead and make 206 an exception set.  They do look pretty good in hand.  Nick also sent me an 86 insert from an NL West team.  I don't like Clevinger at all, but part of set collecting is getting cards of guys you don't like. And the Padres team name plate was always one of my favorites in the original set. 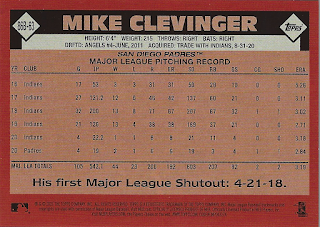 Let's pause for a moment to take a look at the 86 inserts back.  The fronts are nearly identical to the original 86s except for the 35th anniversary stamp, but the back has changed a bit and I am not a fan of the changes.  The first is the card "number."  Is it really necessary to have the "86B-" as part of the card number?  It is too long and looks squished in the base.  But I am kind of used to Topps' weird numbering system.  The second change is the omission of the player's city of birth and their current city of residence.  I mentioned before that I used to look up the birth cities on the originals in an atlas and it helped me immensely in geography.  I have no idea why that info was left off.  Third, the font and spacing of the stats is off.  The spacing is not as bad on other cards as on the Clevinger.  Not horrible, but not good either.  Lastly, the worst change is the completely unnecessary addition of the team name above the "Major League Pitching Record" line.  It just looks so weird there.  The good part is that they got the font of the player name perfect.  So there's that.

Next up is a new trading partner for me, Matt from Cards over Coffee.  I really like his writing style on the blog.  It really does make you feel like you are just casually talking cards with someone over coffee.  Whereas the other trades were offered to me via my trade bait posts, I initiated this deal when I spotted some 86 inserts.  After a couple of getting to know you emails, I sent Matt a serial numbered Eli Manning insert and (I kid you not) 3 Beach Boys inserts for the above 86s.  The Bregman is my first parallel, this one being black /199, and I gotta say that I LOVE the way the name pops.  I also knocking Carlson off the want list because he is one of the overpriced rookies of the year.  The rookie thing is just so bad.  When you pay the price as if a rookie is going to have an All Star career, where is the upside?  These guys would have to have Mike Trout's career arc in order for anyone to profit at these prices.  The chromes feature two teams with a color change.  The Rangers had a red team name in 1986, but I like the blue much better.  The Rangers have always been more blue than red to me.  The White Sox is much more subtle.  The originals were solid white as opposed to the light gray of the new ones.  I prefer the original colors.  I mean they aren't called the Light Gray Sox after all.  Thanks Matt and I am sure we will trade a lot more in the future.

Those of you with sharp eyes will notice that this post is titled "Part 1" which usually implies that "Part 2" is coming soon.  That is the case here as well.  I got in so much on Sunday and Monday that I needed to break things up between blogger trades and eBay hauls.  One of the downsides (or upsides depending on your perspective) to the bad weather was that I had a lot of time on my hands to look through eBay.  Well the results of that are starting to come in.  With Part 2 tomorrow I will show off 4 of my gamble lots They ranged from "meh" all the way to "are you freaking kidding me" so I hope you join me tomorrow to check out the goods.

If I ever find any 2021 Topps (or the incentive to go look for it), I'll save you the inevitable Jose Berrios '86 Topps insert that I will pull.

Glad everything arrived safely! Even I'm a bit stunned that this is my 10th(!) year as a blogger. Wasn't I just 19 and starting my blog on a random Tuesday night on a whim?

Nice stuff. I collect basketball too, but it is hard to justify the prices nowadays.

Glad you enjoyed! Hope to do it again! I got yours yesterday so stay tuned for a post on that!