It figures that my first post under my original user name of hiflew is a day late, but I am going to blame the weather for that one.  A snow and ice storm kept me away from my computer for most of the night.  Of course, today it is 50 degrees outside and the weather flip-flops yet again.  It is getting tiresome, but spring is very close and with that comes the return of baseball and my winter blues are soon to be in the rear-view mirror once again.

Anyway, today I am focusing on the 1995 Topps Rookie All Star Team featured on 1996 Topps.  In my opinion, this set is the beginning of the Topps downhill slide that didn't stop for at least five years (2001) and maybe seven years (2003).  The design is horrible, but the players on the design are not bad at all for the most part.  The thing that stands out the most with this set is the omission of the card for Charles Johnson, the catcher on the RAST.  I am assuming that Johnson was not signed by Topps because he had tons of other cards in 1996.  Although he did have cards in both 1991 Topps Traded and 1992 Topps Traded as a member of Team USA, but his first pro Topps card was not until 1999.  If anyone knows the details of this situation, please let me know because I am curious. 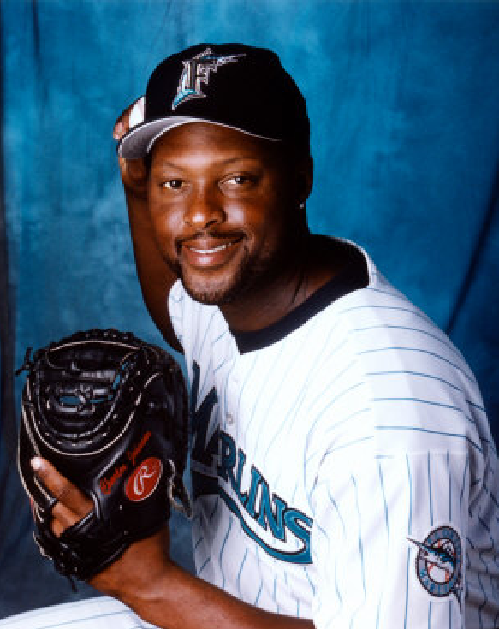 Rockies on the team (Present and future) - 2 (Johnson & Mabry)

This team has 1 almost definite Hall of Famer in Jones and one guy that will probably hang on the ballot for several years in Anderson.  In addition, there are four other really solid careers.  There is also one of the bigger Rookie of the Year fall offs in Marty Cordova, but he was really strong in 1995.  All in all, this is a slightly above average Rookie All Star Team.

Here are the players I feel should have been on this Rookie All Star Team.  This is based on rookie year data only.


Catcher - Charles Johnson - Florida
This was an easy choice as Johnson had almost no competition.  Do you really think Topps would have chosen him despite his lack of a card if there had been anyone else to take the spot?

First Baseman - John Mabry - St. Louis
This was another case of there not being a lot of competition.  Mabry did not have a great rookie season, but he easily outpaced half seasons from Oakland's Jason Giambi and Herbert Perry of the Twins.

Second Baseman - Quilvio Veras - Florida
Here is one that I can't quite figure out.  Topps chose Durham despite the fact that speed was his only positive quality in 1995.  Not only was Veras better at the plate and in the field, he was also much better on the bases with 56 steals compared to Durham's 18.  Just a bad selection by Topps.

Third Baseman - Chipper Jones - Atlanta
This was actually a harder choice than I ever anticipated.  Jones had some tough competition from both Jeff Cirillo of the Brewers and the Mets' Edgardo Alfonzo.  In the end, Chipper was just too much to take down.

Shortstop - Benji Gil - Texas
In 1995, the only real shortstops known more for his bat than his glove were Cal Ripken Jr. and Barry Larkin.  Most shortstops at the time were the good field / no hit variety.  Benji Gil definitely fit into that category and should have been the selection over Miller's half season.  Also considered was Tripp Cromer of the Cardinals and Alex Gonzalez of Toronto.

RHP - Hideo Nomo - Los Angeles
There was absolutely no way that anyone was going to take this spot away from Nomo.  The people that tried were Nomo's Dodgers teammate Ismael Valdes, Pittsburgh's closer Dan Miceli, and Brad Radke of the Twins.

LHP - Andy Pettitte - New York (AL)
There were really only two contenders for the southpaw on this squad, and they were very similar in stats.  Pettitte was a tick better in just about everything except ERA so I chose him to take the spot.


Which Rookie Cup card had the highest card number?

What first name(s) is most common among Rookie All Star Team members?
(the exact name used on the card, not offshoots...meaning Jon and John are counted as different)


Thanx for reading.
Posted by hiflew at 4:35 PM

Email ThisBlogThis!Share to TwitterShare to FacebookShare to Pinterest
Labels: Rating the Rookie Cups

You may be aware of the Team USA/Topps squabble with Alex Rodriguez in the early 1990's that led to his exclusion from Topps for four years after his debut. Jason Varitek, a teammate of A-Rod on that Team USA was excluded for his first decade in the bigs...no doubt related to that. CJ was also on that team, so I'm guessing Topps pissed them off pretty bad back in the day.