Group Break Swag from Juuust A Bit Outside...

I got into my first (but not my last) group break over at Juuust a Bit Outside last month.  Kyle was busting 4 boxes: 2004 Fleer Platinum, 2007 SP Authentic, 2011 Bowman Platinum, and 2012 Topps Heritage.  As far as needed cards go, I struck out on 3 of the 4 boxes.  I got several cards from the 2004, 2007, and 2011 boxes, but I already had them.  You might think at this point that this break greatly disappointed me, but you would be VERY wrong.  This is arguably the best break (definitely top 2) that I have ever been in and all I got was 8 needed cards.  Let's take a look at what nearly made me change my pants.

Let's start off with a pair of throw in cards which I did need.  I have a good chunk of the Rockies from 2008 Upper Deck Documentary, but I think I still need over half for the team set.  I've said it before that set was fantastic in theory, but not very good in practice.  The Tulo from 2008 Upper Deck Spectrum finished out the team set for me, so it was especially appreciated.  This is the type of set that I think Upper Deck did very well, a smaller set with multiple parallels.  Although, I do miss their 1000+ card base sets as well.

Let's start with the non-short print Rockies that I picked up.  I can't stand the Rookie Star cards, mainly because of the multiple uses of the same player.  I understand that they wanted to use the same amount of cards as 1963 for rookies, but the 1963 set was 576 cards while Heritage is only 500.  They could have cut some and still been fine.  But enough complaining (for now anyway).  Next up is the first Rockies card of Guillermo Moscoso who came from Oakland in the Seth Smith trade.  I have not been too impressed with Moscoso in Spring Training and this might end up being his only Rockies card ever, much like Jose Lopez in 2011 Heritage.

Now we'll go onto the SPs.  I actually got more short prints than regular cards in this break.  It helps that Rockies make up nearly 10% of the final 75 cards in this set with 6 total SPs.  I am really liking the backgrounds in each of these three cards, especially the Chacin.  Getting 3 of the 6 Rockie short prints out of one break would have made this break worthwhile, but Kyle was not done yet.


MY
BIG
HIT
WAS
THIS
BEAUTY 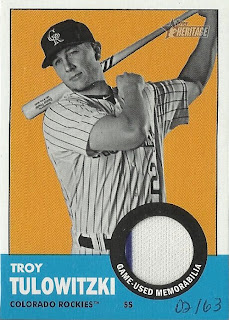 This is the image swap short print Troy Tulowitzki relic hand-numbered 02/63.  This is one of the best pulls I have ever gotten in a break!  I am not one that normally cares about certain serial numbers and such, but I do like that this is Tulo's uniform number as well.  This card might get buried with me one day (NOTE: future grave robbers...I am just kidding).  I was speechless when I saw this card and I think this is the best card that came from the break.  Considering an Albert Pujols autograph #'d to 100 came out of the 2004 box, that is some high praise indeed.

I didn't do as good in JABO's Break #5 (which I will be showing off as soon as it comes in), but I did get a decent #'d hit of my non-Rockies team choice.  Rhubarbrunner you will want to pay attention to that post.
Posted by hiflew at 7:58 AM

Email ThisBlogThis!Share to TwitterShare to FacebookShare to Pinterest
Labels: group break, Just a Bit Outside

Had a little hitch in the giddy-up, but your cards are in the mail today!

It's good you gave that caveat for the future grave robbers. People in the card hobby will go to great lengths to complete their sets....

you got my attention, dude.

btw, got a slew of inserts/s#'d cards here with your favorite logos on them...