Hey guys it's BONUS time.  Instead of a discount blaster I decided to pick up something with a guaranteed hit for someone.  There are only 3 packs of cards and 1 hit, but I figured that was better than 5-8 packs of a random set with very little chance of a hit.  BTW, the hit we got is of a future Hall of Famer on a team he is not really known for.  Who is it?  Well let's read on. 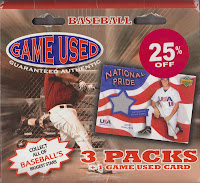 pack three
2007 Topps Series One Jumbo? Pack (22 cards 1 piece of gum)...and yes I did chew it, it was surprisingly good

Congrats to Ryan G. for getting the hit.  Now you should really feel bad for sniping me. hehe j/k
The funny thing about this bonus blaster is the unpurchased Brewers nearly doubled their cards from 7 to 12.  The consolation prizes will be distributed below to the teams with the fewest inserts (Alou) or parallels (Weeks).
First the Alou (3 eligible Twins, Reds, Padres) randomed 3 times (only showing the 3rd) 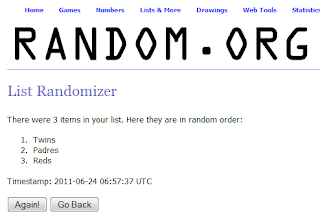 Congrats to Rangers fan Brian who now gets a card of another team that is not his favorite.  The Alou is a good looking card though, even though the team reeks.


Second the Weeks (14 eligible teams including mine...if I win the card will go to the worst scoring  team via stats, the Reds) randomed 3 times (only showing the 3rd) 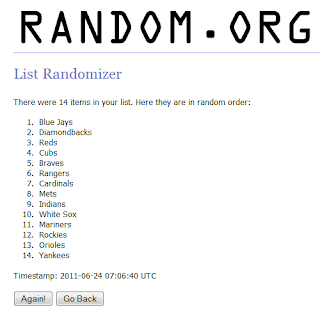 There you go, Ted.  I personally like the Fleer minis better than the base set.  The white border on cardboard stock make the main set seem to be from the overproduction era (ie cheap).  The minis are full bleed and still cheap, but they don't look cheap.


Congrats to the winners although this randomization was kind of anticlimactic following the previous cards given away.  I hope everyone enjoyed the second break here at the Quarry, especially you first timers.  I will be doing another break starting in the second week of July.  I honestly have no idea what I will be breaking then, but suggestions are always welcome and you all are invited to join up again.  Cards for this break will be going in the mail this weekend.  Until we meet for the next break, I will be returning to regularly scheduled programming.
Posted by hiflew at 1:47 PM

Thanks for hosting another awesome group break. I look forward to the next one.

This was fun! I'm definitely in the next time around

Yeah, nice pull out in the end! I'm always happy to be a part of a break.