OPENING DAY IS HERE!!!!!  We haven't had one of these for a couple of years now.  2020's didn't count because Opening Day should not happen after the Fourth of July.  For me, Opening Day is the start of spring.  I don't care what some astronomer says about the vernal equinox or the tilt of the Earth or anything like that.  Spring is baseball.  And for me, baseball is the Colorado Rockies.  I have mostly focused on Rookie Cups and trade bait since I have returned to blogging, but I am still a Colorado Rockies fan and collector first and foremost.
Most stories writing about the Rockies will focus mainly on the player that is not in town anymore.  I don't bear him any ill will, but I see no reason to bring him up today.  He didn't want to be here, and I don't want to talk about him today.  So there you go.
The title of this post refers to a practice that the Rockies have had for a long time, a former Rockies veteran returning home to Coors after bouncing around the league for a few years.  In the past, such Rockies greats as Vinny Castilla, Jeff Francis, Matt Holliday, and Chris Iannetta have had second stints in purple pinstripes.  This year Jhoulys Chacin joins the Rockies again for the first time since a very poor 2014 season.
There are also several newcomers on the OD roster this year.  The only one that has Rockies cards as of now is lefty reliever Ben Bowden.  He should get a lot of pitching time since he is the only lefty in the pen.  Veteran 1B C.J. Cron joins the infield and should get quite a bit of time.  Former Reds top prospect, reliever Robert Stephenson joins the pen after being acquired early in the offseason for Jeff Hoffman.  Finally, starter Austin Gomber arrives from St. Louis in the other big Rockies offseason deal.  He has looked really good this spring, so maybe that deal won't be as lopsided as it looked.
Let's take a look at the 2021 World Series champion Colorado Rockies.  It's Opening Day, they are tied for first place, so why not?
CATCHERS 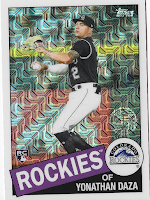 The cards for the new Rockies are from my unreleased 2015 Quarry Unlimited set based on 1976 Hostess.  There are a total of seven customs, but hopefully some of them will get real cards before too long.  The injured list is filled with guys like Freeland and Rodgers that will likely miss the first month or so.  Lambert is likely to miss the entire season after Tommy John surgery last summer.  And Oberg is possibly finished for his career after problems with blood clots in his arm.  Hopefully he can come back, but even more hopefully he can work through the problem and at the very least have a long life.
Thanx for reading.
Posted by hiflew at 3:30 PM

Chacin was with the Yanks all spring. I had no idea he ended up back with Colorado.

They mentioned this on the TV broadcast today. Good to see another Rockie come back home.

I'm digging the Hostess designs, looks like Diaz will have a card in the Topps Now Road to Opening set, so that is one new-ish guy checked off

Was so excited to see that the Rockies beat the World Champions on Opening Day. Congratulations!