Hey guys, I have had yet another busy week here at the Quarry.  Most of time this wee has been spent getting ready for some new additions to the family.  I have had a male beagle mix for around 4 years now, but this past December I took in a second dog.  She was a stray that looked a lot like a female version of Disney's Tramp, that I assume someone dropped off in our neighborhood .  She wandered the streets for a couple of weeks and I always noticed she was friendly when I was walking my dog.  They got along well and played great with each other.  Finally a few days before Christmas I decided to bring her in on a test basis.  Two weeks later she was in heat.  Before I knew it my dog did what dogs do and she was officially part of the family. To make a long story short, according to my calculations, she will be due sometime this week, so I spent the week building her a whelping box and creating a general area for her to give birth.  So sometime over the next week I should be blessed with a quantity of puppies that will be part beagle/part unknown from the daddy and what I have come to believe to be part Yorkie/part husky from the mommy.  So who knows what will come up on the genetic randomizer, but I am looking forward to my new little mutts joining the world.

As much fun as it is to talk about my dogs, and I will be posting photos of the family soon, you guys came here because of cards.  The Sunday PWE trade bait posts have been my most popular posts in the month that I have been back.  I enjoy them too because they basically write themselves and more importantly I get cards out of my prison boxes and sent to people that will appreciate and even showcase them.

As always, I will trade for Rockies, Topps rookie cup cards, 86 Topps homages, the few remaining 2011 Topps Opening Day blues that I need for my master set, 2005 Topps Rookie Cup rainbows that I need, 2020 Donruss rainbows that I need, or the various insert sets I am currently putting together.  The links are working for 6 of those 7, and the other will be done shortly, but for now you can simply ask if I need it.

If you just simply don't have anything I need, don't worry about it.  We can still trade.  I will happily accept serial numbered cards from teams I am in short supply of at the moment.  All I ask is that you include an extra 1 or 2 just to take care of the stamp I will need to trade them later.

These are current teams I am comparatively low on trade stuff. 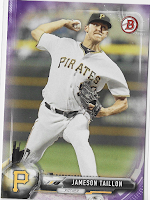 As always, place a claim on any card that you'd like in the comments section or you can email me directly at hiflew AT yahoo DOT com and we can talk trade.

Thanx for reading.
Posted by hiflew at 3:26 PM

I could use the Gary Sanchez if available.

gray doesn't make 2017 donruss look any better, but i'll sign up for the Kenley Jansen anyway.

The Angels In Order said...