Boy it really seems like a week goes by way too fast.  It seems like just yesterday I was writing up last week's Mailbag.  Although it was a two part post that ended on Tuesday, so maybe that is why it seems so short.  Who knows?  Anyway, today between Sportlots orders and blogger trades, I mailed out 11 PWEs.  If you are expecting something from me, chances are it went out today and you should get it by the end of the week.  I had another busy week here at the Quarry with regards to the mailbag, so let's dive right in and check out my new goodies.

We'll start with blogger extraordinaire Night Owl.  I pretty much assume that if you are reading this blog, then you already know who he is, but just in case you can check him out here.   Greg and used to be regular trading partners and since I have returned to the blogging community we have picked up right where we left off.  The Michael Toglia is from the 2020 Bowman/Chrome retail mega box.  I have no hope of ever finding one of those in a store, and I am not paying jacked up eBay prices for them, so I appreciate any Rockies sent my way.  The star of the PWE is the Todd Helton 2019 Topps Franchise Feats Gold insert #'d to just 50.  I'm not a fan of parallel inserts, but since they aren't going away I'm still collecting them.

Next up we have a visit from the Lost Collector.  I reached out to AJ when he made this post showcasing his first 2021 Topps finds.  I asked about the Bieber and a quick trade was born.  The only this missing from this card looking like it should be in the 1986 Topps set is the absence of Chief Wahoo on the cap.  But I guess that's a lost cause now.  I'm just glad the Indians name lasted long enough to be on these 86 inserts.  I still don't know why there isn't much of an uproar over the Minnesota Vikings logo or the Notre Dame Fighting Irish name and logo.  Well I do know, but I really don't want drama here.  Moving on.

Next up we come to a Sportlots purchase.  I got this one on budget shipping instead of my usual box purchase.  I use budget shipping if the costs are the same or a little more just for the time convenience.  This buy was all about the 86s.  I was searching for cheap 86s and this seller has 4 of them (including the sweet Gwynn above) along with the Joey Gallo chrome for a good price.  With Sportlots shipping, the costs are exactly the same to ship 10 cards as it is to ship 5, so I went fishing for bonus cards.  I couldn't find any Rockies or 2020 Donruss needs, so I went to vintage and scooped up 5 cheap 70s cards from this seller including the 76 Topps Ron LeFlore above.  The colors of that card just screams 70s to me.  When I think 70s, the colors brown, orange, and yellow always come to mind.

This next group was from a second Sportlots seller.  This particular seller had a significant jump in shipping prices after 4 cards, so I stuck with just 4 here.  The two cards above were the main purchases, but I still wanted to get to the max of 4 cards.  So I picked up a couple of serial numbered cards that will show up on a future Sunday PWE Trade Bait posting.  As far the two 86s go, the Barry Larkin is my favorite card from the 86 insert set that I have seen thus far.  I haven't seem them all yet, but it will take a lot to better this one.  I don't care that the uniform is not from the era.  It looks great for a guy who just missed out on being in the original set.  Larkin's rookie was in 1987 Topps and he was not included in the 86 Topps Traded set.  Unlike Canseco, who made his Topps debut in the 86 Traded set.  I prefer his original 86 to this one, but the new one is not bad. 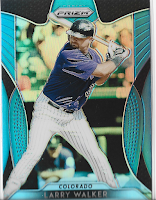 Next up, we have an eBay gamble lot.  The past few should have shown you how much I have started to enjoy these lots.  They have replaced my retail buying and to be honest in most case I have gotten more bang for my buck.  This lot is actually a different kind of gamble lot.  This is the "combined shipping" lot.  I bid on a lot of 12 2019 Panini Prizm parallels solely for the Carolina Blue Larry Walker shown above.  I won the auction as the sole bidder, but I was on eBay when the auction completed, so I had time to look at the seller's other auctions that were ending very soon.  I ended up finding a lot of mixed 2019 and 2020 Donruss parallels in the hope of getting a needed one.  The auction was ending quickly, so I didn't have time to check my lists, I just gambled.  It turned out I didn't need any of them, but I got them cheap enough that I don't regret the purchase.  Plus, that 2019 Pujols Independence Day is pretty nice and if Brock Burke happens to have a hot streak this season, his Rated Rookies will climb in sellability as well.  But for now I just have to play the waiting game.

The final eBay gamble lot really was a gamble because it was completely unknown.  The reason for this purchase is actually because I am currently working on my comprehensive 2019 Rockies want list, which should be done in a few more days.  When I was going through Beckett checking my 2019 checklist draft, it turned out that I had no clue about the 2019 Topps of the Class set existing.  I believe the packs were given away in schools for good grades.  So I went to eBay looking to buy the 3 card Rockies team set.  Instead of finding that, I found a lot of 20 unopened 5 card packs for about the price of a blaster.  I knew I could find the Rockies team set cheaper, but instead I made the impulse buy.  I haven't opened packs in a long time and this was a cheap way to scratch the itch.

The reason this lot was so cheap is because the 2 big rookies from 2019, Pete Alonso and Tater Tot, were not included on the checklist.  So hoarders had no real reason to buy.  That makes me as a collector happy.  The design of the set is virtually identical to 2019 Topps/Big League, but with different photos.  I ended up getting the above Charlie Blackmon along with Nolan Arenado, but I missed out on the Trevor Story to complete the team set.  The complete set is 100 cards and I got 100 cards in my packs, but collation was not perfect which is understandable for a group of loose packs.  I ended up getting 71 unique cards with 28 dupes.  That only adds up to 99.  The final card was this.

This Bryce Harper is from the only insert set simple called Greats.  Each card in this set is serially numbered to only 299.  The Harper is nice, but I would have preferred getting Nolan Arenado, the only Rockie in the set.  But I guess Harper is still a big name, even if his production will likely never match his hype.  Very doubtful I make back the money I spent on this one, but it was still a fun rip.  And who knows, I may try to track down the missing 31 cards and build this little set.

Nice Gwynn. Even nicer that it was cheap.

I bought a similar lot last spring and turned it into a mini break. The only Rockies player I pulled happened to be Trevor Story... 5 times! Tracy's Box Breaks ended up with the Rockies in the break, so he might have an extra. I also pulled one numbered card (Kershaw).

I have the same strategy as you in regards to shipping prices on Sportlots. If there's a minimal increase from 4 to 10 cards, I usually just sift through that seller's inventory and find a few more things. Some sellers have like a $4 jump in shipping after you hit the four-card mark, which I don't quite get.