Welcome to the latest episode of The Rockie Trading Post.  Tonight's special returning guest is Dennis from Too Many Grandersons.  Here is the recap of Dennis' first visit to TRTP.  He still collects the Tigers and former Michigan athletes of all sports and has a very enviable rookie card collection that you can see here.  This trade came about from a brilliantly simple idea from Dennis.  He was planning on going to a card show and asked everyone what they would want to trade for, in effect making a shopping list.  I sent him some Tiger autos from my 2008 Tristar Prospects Plus box breaks along with a few other random Lions and Tigers (including a new Granderson for him).  You can see his take on the trade here and you also get some cartoon buttocks free of charge.  You can see my take on the trade starting with the next sentence. 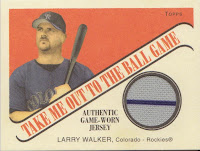 My contribution to Dennis' shopping lis was (surprise) Rockies relics and autos.  First up is my favorite of my three new "hits," a 2004 Cracker Jack Larry Walker jersey.  It is a bit smaller than a normal card, but the jersey piece appears to be normal sized.  If I am not mistaken this is my first horizontal pinstripe and my first gray pinstripe jersey pieces.

The other two "hits" that Dennis picked out were these Rockie pitching prospects autos.  Well, actually Morillo is a former Rockie that is now pitching in Japan, but I think this is my first card of him so it should knock another player off my One of Every Rockie list.  Greg Reynolds was the overall #2 draft pick in 2006 ahead of such players as Evan Longoria (#3), Clayton Kershaw (#7), and Tim Lincecum (#10) among others.  Can I request a do over?  However, he is still with the Rox and was one of the final cuts in Spring Training this year, but man he seems like a bust of Darkoian proportions.

As usual Dennis always throws in some extra cards in his trades.  These two are special because they finished out team sets for me.  The Tulowitzki is my final 2009 Bowman base card need and the Mejia finishes the 1994 Collector's Choice Series 1.  It does appear that Mejia just left a tough 7-10 split though, but he was bowling with a glove on so he gets a pass.

Our Todd Helton card of the day is this 2008 Topps Co Signers base card.  I wonder who he is paired with on the parallels.  The 1999 Skybox E/X Century Derrick Gibson card is great but the scan does not do it justice.  For those of you that haven't seen this set, get one.  They are clear acetate (I believe), everything white in the scan that isn't uniform or name is completely see through.

I am not going to discuss my personal politics here, because we are talking baseball cards and it should be light.  That being said, I do love the 2008 Topps political inserts.  As long as political are limited to every four or eight years I think they can work quite well.  This John McCain gold (bronze?) card leaves me 5 short of the parallel set.  I still need the base insert of McCain as well as Obama to have that complete.

My favorite political insert has to be the 2008 Historical Campaign Matchups (although First Couples is a close second).  Dennis added these four at my request and they feature some of the greatest Americans of all time (and J.Q. Adams).  Six presidents on those four cards.  I love Presidential history and could probably bore all of you for hours with random Presidential trivia, but I won't at least until I run out of post ideas a few months from now.


Thanks again Dennis for the trade and I am sure we will be doing it again.  Don't forget to check out his blog here and give him some Michigan guys, you better hurry before they are out of the league (zing).  Well that just about wraps up this edition of The Rockie Trading Post.  Tune in next time for another returning guest that brought a total of 0 Rockies and yet I am still happy.  Until then, we are officially signed off.
Posted by hiflew at 2:21 PM

Nice to see someone appreciate the presidential cards inserted in baseball products. I love the Presidential Pitches set in this year's Opening Day set.