Welcome back to the latest edition of The Rockie Trading Post.  Today's special guest is Jack (aka Baseball Dad) from All Tribe Baseball.  If you haven't met Jack yet, surprise he is a Cleveland Indian collector, but he also has a couple of cool side collections of Jim Abbott and the Pacific ornaments set (which I love also).  I contacted Jack after he mentioned opening a few packs of 1993 Diamondmarks which are one of the rare early oddball sets containing Rockies and asked him if he got any of the 4 Rox in the set.  He replied he got two he didn't need and a trade was born.  See Jack's review of what I (and McCann Can Triple) sent him here.  Here is what he sent me. 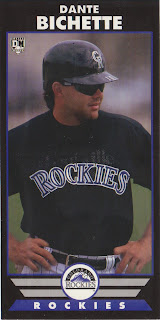 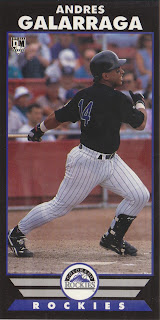 First up is the two Diamondmarks, which are basically a combination of a baseball card and a bookmark.  I honestly had no clue what these even looked like before they arrived...they are HUGE, even slightly larger than the oversized Fleer products from the mid-90s.  If anyone has an idea on good storage for these please let me know.  They are great looking though and pack fresh, and if anyone has a Daryl Boston (what an odd choice for a small set) and Charlie Hayes I would welcome them.

This one was a COMPLETE surprise, since I didn't send Jack any GU or numbered stuff.  I appreciate it definitely.  Once the shock of getting a jersey card #'d to 775 wore off, I was wondering a bit about the bright red swatch.  Was this an early Rockie card and they used an Expo jersey or a late one that used a St. Louis jersey?  Nope it's from the 2002 Upper Deck Diamond Collection.  Then I read the back and saw it was from the All Star Game, makes sense now.

Next up is a 2003 Topps Total silver parallel of failed catching super prospect Ben Petrick.  Well maybe failed is too strong a word, because he did play in the majors for several years, but he was hyped as the next Piazza or Fisk in the minors.  Maybe the next great Colorado catching prospect Wil Rosario will pan out and shore up a position (2B also) that has never really had a star in Denver.

Here is 2011 Topps Toppstown insert of Carlos Gonzalez.  I am so glad he lived up his minor league hype last year, having been the centerpiece of separate deals for both Dan Haren and Matt Holliday.  The 7 year/80 million dollar contract extension is a bit scary (for a non-Yankees team) for one real year of production, but if he produces over the life of the contract what he did last year it will be a steal of a deal.  If not it could be a long seven years for the Rox, but let's not go down that road.

Our Todd Helton card of the trade is this thick 2005 Bazooka gold parallel.  I always loved the Bazooka comics as a kid, but some of the jokes were lame even for a kid.  I do like the Bazooka cards though and will probably bust a box or two this year.


Thanks again Jack for the great trade and I hope we do it again real soon.  Don't forget to check out his blog here.  Well, that just about wraps up this edition of The Rockie Trading Post.  Tune in next time for a rare trade where I give up Rockies.  Until then, we are officially signed off.
Posted by hiflew at 1:20 PM

Glad you liked the cards ! I still have 3-4 more Walker/Helton jersey cards including a dual of those two.

P.S. More people know me as Baseball Dad (I have two grown sons who collect) but I answer to most anything !!