Welcome to today's edition of The Sunday Afternoon Blaster.  I am going once again with an older Upper Deck discount blaster.  This time with the unpronounceable set.  Is is GOO-di or GOW-di?  Anyway this is the 2009 version of this set.  I hated the 2007 version because it was all minis and very hard to store.  The 2008 version was better, but still had the 2 different back colors on minis and had Derek Jeter's mug on half of the set.  The 2009 version I had never opened, but it got a lot of hate on blogs.  I am fairly certain that I will not be collecting this set, so the goal here is as many Rox as possible AND the ugliest card in the set Dave Concepcion.

Card coloration is it's availability


On with the show. 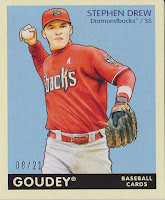 IMPRESSIONS
Design: D+
This is a painted set, which works for some, but I personally don't like that much.  What makes it worse is that some of the artists here make Dick Perez look like Da Vinci.  Why are there so many painted cards with the wrong uniform?  It's not like they had to wait for a picture or anything.  Overall kind of bleh for me, but I can see how some people might gravitate toward these types of sets.

Inserts / Hits: B-
I got all excited after the first four packs thinking that they skipped minis in 2009.  Then came 3 in the last four packs.  The 4 in 1's are sort of odd.  Do each of them have several parallel colored borders or does each have a specific color?  The one thing I have always loved about Goudey in general is the Heads Up subset, they are just so fun.  Some may say that they are designed for kids, but technically so is our entire hobby.

Value: A-
Not horrible, but I still prefer a guaranteed hit in a blaster.  After looking through deciding which mini to scan I noticed the numbering on the mini and getting a card #'d to 21 in a discount blaster is fantastic, even if it is some failed prospect or bench player or worse a Diamondback.  I did get three short prints including two of the greatest players of all time in Nolan Ryan and Stan the Man.  I will happy to trade each of the 3 SPs for 2011 Heritage SPs that I need.

Rox in the Box: 3
Finally, a decent showing for the Rox in an Upper Deck blaster.  I had 0 Rox from this set and there are a total of 5 base cards (including 2 in A's uniforms).  I knocked out the Garrett Atkins and another Fowler rookie card.  Plus I got the 4 in 1 with Atkins and 3 other third basemen that I didn't even know about.  One question though, why do they list the team name as the Colorado Rockies when all other teams are just the nickname?  Card companies need to realize that the Rox have been part of the league for 18 years now, people now know where they play.

Will I Collect This Set: F
Nothing in this blaster made me change my mind, so everything is up for trade. I do hope someone is collecting this set, because every set needs a little love from someone.

Overall: C
For me, this set hits a couple of my pet peeves.  Short prints, retired players in the base set (although I don't mind the Sports Royalty subset), and minis.  It does have only baseball players and there doesn't appear to be any ridiculous gimmickry so I'll bump it up to a C.  To me a C is not collectible as a set, but it was still fun to see for myself.

I need that Nolan Ryan!

I could use #232! Shoot me an email if interested!