Welcome back to another edition of The Rockie Trading Post.  Tonight's special guest is first-time visitor A.J. from The Lost Collector.  For those of you that haven't had contact with A.J., he is a Yankees collector and also has an impressive Tino Martinez collection.  This trade was brought about by my Tristar box breaks from a few weeks back.  I sent A.J. a few of the Yankee prospect parallels along with a few other random Yankees in exchange he sent me some very nice Rox and Opening Day card.  His review of the trade is here.  My review is just below. 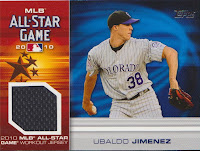 Let's start off with the gem of the trade, in my eyes at least.  A 2010 Topps Update Ubaldo Jimenez All Star jersey.  I honestly don't care that it wasn't game worn.  I would prefer that no jerseys are called game used because then they would be cheaper for those of us that don't care.  I just like that they look good in most instances.

Here are a couple of #'d parallels of Rockies at very different points in their careers.  Avery Barnes, shown on his 2010 Bowman Chrome purple refractor, is just beginning.  He was the Rockies 11th round pick in 2009 and is sort of a light hitting speedy outfielder type player.  Todd Helton is of course the greatest Rockie ever and probably has a few years left as a major leaguer, but he is past his prime and is no longer the star of the team.  This is a 2008 Topps Triple Threads emerald parallel #'d to 240.  I now have two of the three Rox emeralds from that set, I only need the Matt Holliday for a complete team set.

Next up we have Todd Helton as a youngster.  From left to right we have a 2000 Fleer E-X, a 1998 Collector's Choice Starquest, and a 1998 Pacific Paramount platinum blue parallel.  The Paramount parallel is actually a really tough pull at 1:73 packs with a 250 card set.  That means on average one of these cards came out of every 500 boxes.  I am happy with it, but I am so glad Pacific is no longer around with their multiple rare parallels.

Let's move onto the only player that could conceivably be in the current argument for best Rockie ever other than Helton, Larry Walker.  The first card is a 1999 Pacific Paramount base card.  There are 7 parallels (4 rare ones) of this card that I will hopefully track down in my lifetime.  Finally we have one of my favorite sets that I have seen from my collecting sabbatical, 2000 Fleer Impact.  In my 2011 Mountains to Climb post, I said I wanted to pick a set from 1996-2005 and try to build it.  I think 2000 Fleer Impact will be that set, assuming I can find a box of it.  I really like the design, even though it does look sort of plain...it just works for me.

Now we get into the Opening Day portion of the trade.  Here are two inserts of a potential future member of the "Greatest Rockie Ever" debate, Troy Tulowitzki.  The Stadium Lights is my first, so I need one more of this card for my Rockie binder.  The Superstar Celebrations is actually the 3rd I have, so it is up for trade if anyone needs it.

Two cool looking horizontal blue parallels, which I am finding is going to be the hardest completion of the master set.  Both are great photos, but I want to complain just a bit.  I am tired of Topps putting both horizontal and vertical cards in sets.  Sure some of the photos don't work as well in vertical positions, but they look horrible in a binder.  Perhaps they should leave the vertical photography for the flagship set and maybe make Opening Day or a new set a showcase for great horizontal photography.

Here are a couple more inserts.  The Jose Bautista is the easiest Spot the Error in the set.  It is so easy that I only scanned one side.  The Toppstowns are a surprisingly difficult to complete insert set.  They only show up 1:4 packs and it's a 25 card set, so it really isn't THAT surprising.  But I am used to easily getting way more Toppstowns that I need.

Let's close it out with a couple of base cards.  The Ubaldo was the last card I needed for the base team set for the Rockie binder.  The Mark Reynolds is a little sad for me.  It shows him photoshopped with his new team, the Orioles.  Now the Rockies won't be able to pad their strikeout totals against him anymore.  It's just a shame.


Thanks again A.J. for the trade and I already have our 2nd trade on the schedule for posting.  Check out his blog here and trade him your Yanks.  He'll give you a very nice deal.  Well that just about wraps up another edition of The Rockie Trading Post.  Tune in next time for a first time visit with a Blue Jays collector.  Until then, we are officially signed off.
Posted by hiflew at 7:59 PM

I received the cards from our second trade today - thanks!

I didn't realize the Pacific Helton was one in 500 boxes...maybe I should have held on to that a one a bit longer;) Kidding - glad you like it though!

That Bautista card is one of the dumbest things I have ever seen on cardboard. Make it a little bit of a challenge, at least.