New Members of the Family in Two Forms

When you are a fan of a team, and especially a team collector, sometimes it seems you get to know so much about players that they seem almost like part of the family.  Of course this is obviously a one way notion since none of these people have a clue who I am, but let's go with it anyway.  The point is that when new players debut for your team, it is somewhat like welcoming new members to the family.  Some will be short term guys, kind of like the cousins that you haven't seen in 30 years or so and probably wouldn't even recognize out of family context.  Others will be familiar faces that will be a part of your life for potentially many years.  I introduced the Opening Day Rockies here.
With that in mind let's introduce the five new members of the Rockies fraternity that debuted for the team after Opening Day.  They are Rockies #599 - #603 in the history of the franchise.

Trejo was the first addition to the Rockies roster this season.  His contract was selected when the hot hitting Chris Owings went down to injury.  Trejo was picked in the 16th round in the 2017 draft and has not been in the Rockies top 30 prospects ever.  He is likely to not be much more than a utility infielder, but one never knows.

Lawrence actually was supposed to debut in 2019 or 2020, but he was caught an 80 game PED suspension while in the minors.  Current Rockies prospect Colton Welker was just suspended for the exact same drug, so I have a feeling that someone in the organization is about make some big news after they get caught.  Chosen in the 12th round in 2015, Lawrence has never been a top prospect, but he has hung around the bottom of the Rockies top 30 for several years.  He was #27 in 2017, #16 in 2018, #18 in 2019, and was unranked in 2020 before jumping back up to #30 in 2021.  He seems like the type of relief pitcher that will consistently be on the shuttle between Denver and AAA Albuquerque for a couple of years.

Adams is the first newcomer that already had MLB experience having experience with the Cardinals, Braves, and Nationals before latching on with the Rockies.  Oddly he had two separate stints with each of those three teams before 2021.  He is best known from his Cardinals years though and was a member of the same Topps Rookie All Star Team as Nolan Arenado in 2013.  I don't anticipate Adams having a long run in Colorado and it is doubtful he will ever get a real card with the team.

Gilbreath actually had a chance to be Rockie #600 as he was called up as the 27th man in an early season doubleheader, but he did not play in either game and was sent back down for another 2 weeks.  He was brought back up to take a spot on the roster when Antonio Senzatela went on the IL.  Gilbreath was picked in the 7th round of the 2017 draft and made his debut in the Rockies top prospect rankings in 2021 at #26.  He might be another reliever like Lawrence that will get a lot of frequent flyer miles between AAA and MLB.

"Reverse Name" Joe is the most recent Rockies debut.  I made the card of him as a third baseman, but he will probably see more time at first base until the Rockies realize that Josh Fuentes is not a major league quality player.  Joe has bounced around several organizations since being drafted by the Pirates in 2014.  Joe was actually selected with the very first traded MLB draft pick.  The Marlins traded the Compensation Round A pick #39 to the Pirates for reliever Bryan Morris.  The length of Joe's stay will likely depend on whether C.J. Cron's injury will require an IL stint.

I mentioned the two forms in the title.  The second form is my actual family.  I have mentioned my dogs off and on for the past couple of months, but I haven't showed them off yet. I have had a few of you asking about them, so I figured I would show off each of their "rookie cards" along with the newcomer Rockies. Each of the dogs has a Rockies related name, so it really does fit well here. 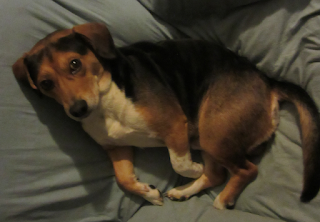 Dante
Dante is my long term pet.  I have had him since March 2017.  He is obviously named for Dante Bichette, although I frequently use the nickname Bubby for him.  He is a beagle mixed with some large breed, probably a Rottweiler, but just a guess.  He was found on the railroad tracks by a neighbor of my uncle that worked for the railroad.  They kept him on their backyard a while, but they had small kids and he was a little too rough with the kids.  He wasn't mean, just really playful and very strong for his size.  We had our ups and downs and he transitioned from a big backyard to being a full time indoor dog with me, but I love him to death. 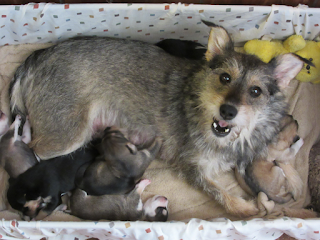 This is my "mama dog."  She is named after former Rockies starter Jeff Francis and I usually call her Franny.  I am not 100% sure, but I think she is part Husky and part Yorkie.  She was a stray wandering the neighborhood for a couple weeks right before Christmas 2020.  As I walked Dante, I notice they played well together, so I took her in.  The timing was either really poor or just perfect because she went into heat two weeks later.  I brought her in for that purpose, but I was hoping it wouldn't happen until the summer.  But the love came early.  I absolutely love this photo as you can see 5 of the 6 pups pretty easy (the 6th is the black swatch behind her back).  Her panting was also caught perfectly so it appeared she was giving a big toothy grin for the camera. 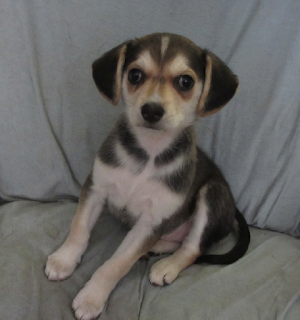 Blake is my female pup.  She is named after the Blake Street Bombers.  She obviously takes after her daddy, although she does have Franny's long skinny legs.  She is kind of shy, but when you get her going she is pretty active.  Of the 6 pups, she was by far the least active and that is the main reason I kept her.  When she was smaller, I thought she was a Husky because she was just black and white.  Although in the last couple of weeks the brown has shown up a lot more.  The poor little thing has an umbilical hernia, which developed because basically the belly button didn't close up fully.  It is not life threatening and doesn't seem to bother her, but it kind of scares me nonetheless.  There is a chance it will fix itself, but she may need a minor surgery in a few months. 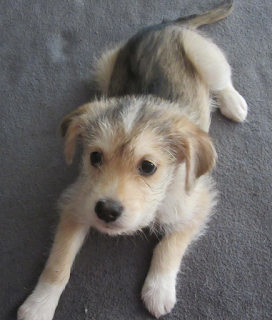 Bomber is my male puppy and the first born.  He is named after the Blake Street Bombers as well.  I was planning on naming him Helton, but I wanted their names to pair together and she didn't seem like a Todd.  Although since his middle name is Lynn, I could have gone that route.  But I digress.  He is another that I though would have the husky look except with the obvious blonde hair.  But as he has grown he has started to get the terrier head of his mother, just a lot bigger.  He was without a doubt the pick of the litter for me.  He is a sweet dog, but he has a bit of a biting problem right now.  I take the blame because he was the last of the 6 pups to get teeth and I let him gum my fingers.  Now he tries to do the same thing only his teeth have joined the party.  He has some issues that we need to work through, but overall he is a great little dog. 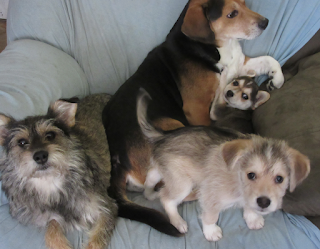 Here is the whole family together.  I tried to get all four of them to look forward, but three was the best I could do.  Blake and Dante usually pair up to play and Franny and Bomber pair up.  Strangely the two boys and the two girls rarely play with each other.  Regardless, I love my little family.  Although I will NEVER refer to them as "fur babies."  I hate that term.

The little family looks like a lot of work! Cool to name them after the Rockies.

i like the 76 hostess design for customs - they look great! also some good boys there!

Awesome rookie cards! I hate that pet term as well.