The most memorable card from the 1988 Score set to a lot of people is probably this one. 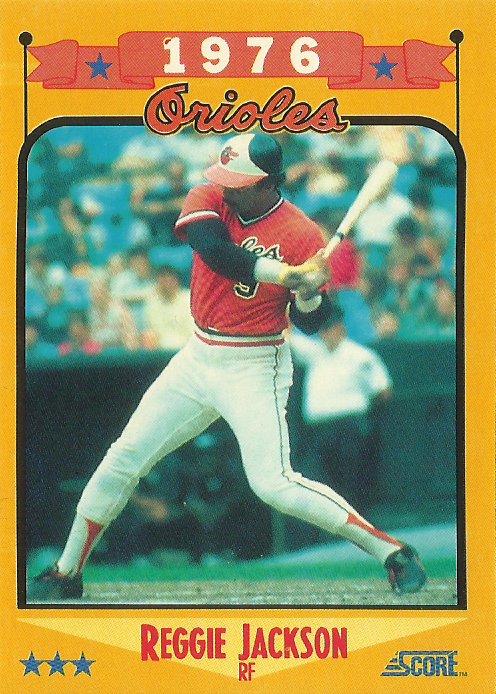 1987 was the final year of the Hall of Fame career of slugger Reggie Jackson and Score provided a 5 card tribute to his career.  That particular card is memorable because, at that point, this was the only card (the only mainstream one anyway) featuring Jackson in an Orioles uniform.  That was very cool, but even cooler was that each card in this subset showcased Reggie's 5 stints with 4 different franchises including his bookends with Oakland.  To this day, I think this is the only tribute of this sort that has been made, please correct me if I am wrong.  This is one of the many reasons that I loved this set.  I knew as soon as I decided to based the 2014 Quarry Unlimited set on 88 Score that I needed to do justice to the Jackson retrospective.  So the big question was who deserves the honor of replacing Reggie this season.  Before the season, I put together a list of several worthy candidates that I assumed would be retiring this season.


1. Derek Jeter - This is obvious choice because he had the best career of anyone that was playing his last season.  The fact that he only played for a single team also made it an obvious choice that Jeter was not right for this particular honor.  I think he got enough accolades throughout the season that he won't miss this one.

2. Paul Konerko - This is the other retiring player that will probably get some Hall of Fame attention.  Konerko did play with three teams, but he played most of his career with the White Sox so he wasn't really right either.

3. Eric Chavez - Chavez had a sneaky good career.  The problem with choosing him is that he was almost an exact opposite of Paul Konerko.  He spent a long time in Oakland and had his best years there and then had a pair of nondescript years with both Arizona and the Yankees.  Too much time in one place.

4. Raul Ibanez - This choice had potential in my mind.  Like Reggie Jackson, Ibanez shuffled his slugging around the league quite a bit.  The big strike against him is that he did not exhibit the flair of Reggie.  To be honest, until I looked it up I didn't realize that Ibanez had even been around as long as he had.  That was never a problem with Reggie.

5. Bobby Abreu - At the beginning of the season, this was the choice.  Abreu came back this season after sitting out 2013, but his career was closest to Jackson.  Although I chose Abreu, I was left with the nagging sensation that he wasn't a similar player to Reggie
Then came an announcement in late summer.  A somewhat surprising notice that a 33 year old slugger with a penchant for striking out, much like Reggie Jackson, would be his final games in 2014.  The fact that he was being traded to Jackson's Oakland franchise really put the bow on the choice.  That being said, the player I have chosen to pay tribute to in the 2014 Quarry Unlimited set is Adam Dunn.

6. Adam Dunn - Although he will probably not make the Hall of Fame like Reggie Jackson.  I think he may have made it if he hung around until age 42 like Reggie did.  He also played for five teams so that math works perfectly.

So let's check out the Special Career Retrospective of Adam Dunn.  Since there are only 5 of these, I kept them a little bit bigger than normal. 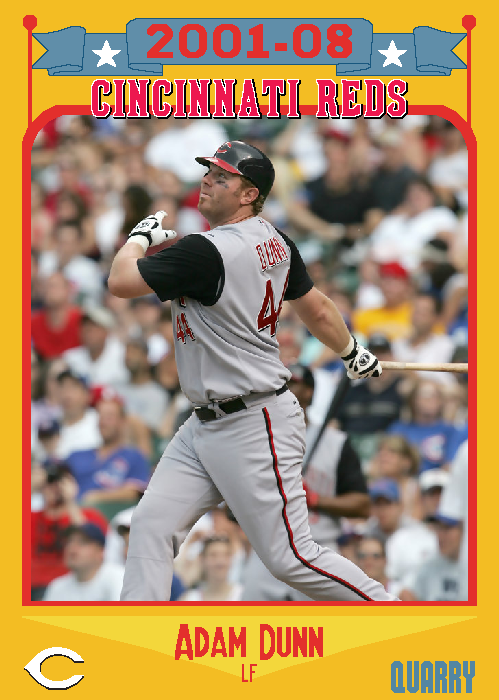 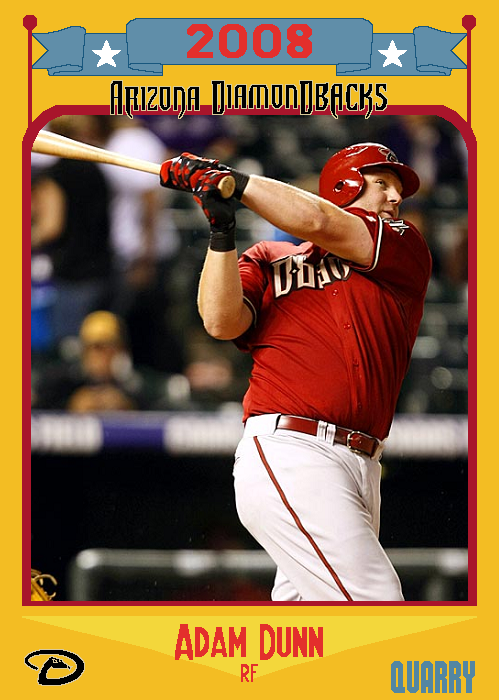 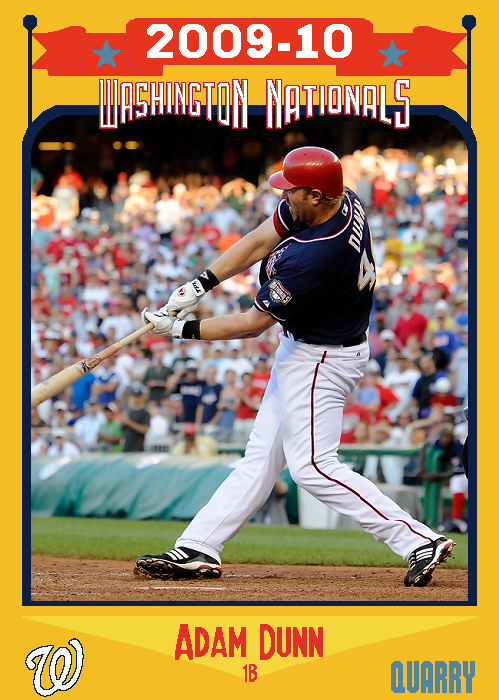 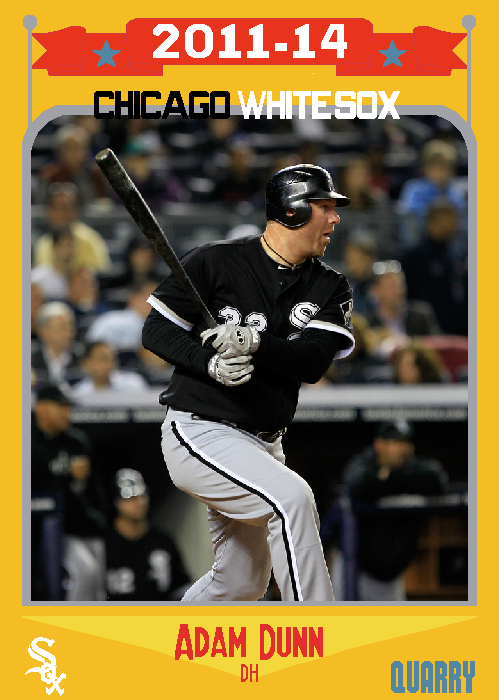 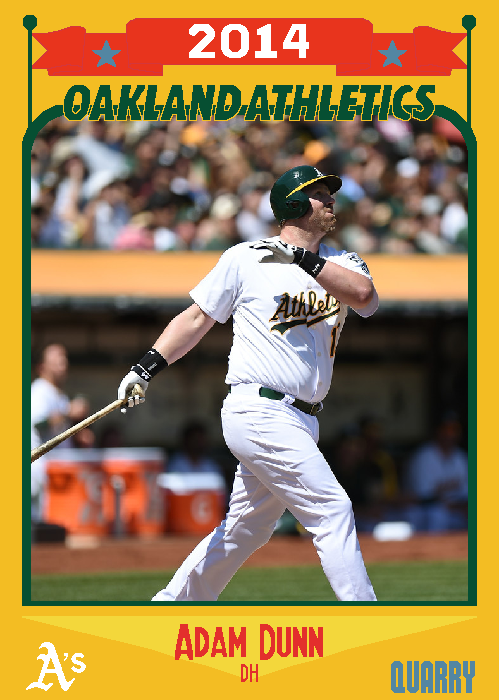 Without a doubt, these were the most labor intensive cards to make because I made them with Paint, not Photoshop.  Also without a doubt, these were the most fun cards to make and the ones I am most proud of.  Aside from the 4, which I had to basically make from scratch, I feel I got the spirit of this design down perfectly.  Unlike the original set, I still made two other Adam Dunn cards, 1 each for the White Sox and the A's team set.  So you still have a little bit more "Big Donkey" to look forward to.

Was Adam Dunn the correct choice in your mind?  Do these cards look as good to you as they do through my rose-colored "creator goggles?"

On an unrelated note, I have some cards for you but I need your mailing address. Shoot me an email when you get the chance please!

Dunn leaped out at me as the ideal choice for this before I went through all your options. I also thought: man this had to take a lot of work.

Great job with the Dunns. I agree with him being the best choice.

As for tribute cards for each stop in a player's career, 1990 Topps did that for Nolan Ryan, though he was still active at the time, so not exactly the same thing.