I had a pretty good first 5 packs yesterday let's see how this set of 5 works out.
RELEASE MCCRACKEN 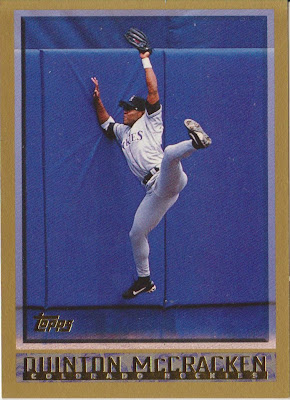 Pack total - 3 pts
Running total - 74 pts
Blah pack.  Nothing much to say about anything in that pack other that the fond remembrances of Matt Holliday in a Rockie uniform.
Pack 9:
3          Lou Holtz (-1 pt Marbles in Mouth Disease)

Pack total - 2 pts
Running total - 76 pts
That was possibly my least favorite pack ever because of the two cards of “The Bearded Douche” (trademark pending).  Aside from that, the rest of the pack was saved from complete garbage by the surprising inclusion of Brian Roberts on the Favorite Players list.  (Thank you Troll).
Well, that fifth sucked.  I’ll be back tomorrow evening (maybe morning) with the next 5 packs and the first hit.
Posted by hiflew at 4:56 PM

If you want to throw the Royal Wedding card in with Dubya, I'd be happy to oblige. As I've said many times before, Kate Middleton on cardboard is a dream come true. :)