Welcome to the ninth episode of The Rockie Trading Post.  Tonight's special guest star is none other than "card blogging superstar" Greg the Night Owl.  For the maybe one of you (and that may be pushing it) that have seen my site, but not his you can check it out his blog here.  Greg is a Dodgers supercollector and of course the awesomeness that is night cards.  Of course, now that practically every game is at night almost every card is a night card.  I sent him a Heritage Kuroda refractor along some cards on his wantlists.  I return I got a big stack of Rockies.  Here are the highlights.

We'll start out with a couple of nice Chrome cards.  The 2009 Jeff Francis is an Xfractor.  I hope he does well with the Royals, who I think will be contending team within two years.  The 2010 Esmil Rogers is numbered to 599 and, with the Xfractor from the last episode of TRTP, is the beginning of a rainbow. 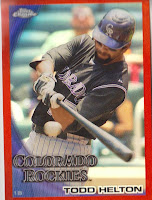 These are the first two cards I have of both players in my Rockie collection.  Herrera is part of a 4 man battle for the 2nd base job this year.  Honestly I didn't remember Clayton playing for Colorado, but now that have a card showing it I shouldn't forget again.

Next up we have a cool play at the plate card with Khalil Greene being out (I am assuming).  Then we a sweet 1995 Flair Dante Bichette.  Bichette is quite possibly my favorite Rockie of all time and is the reason I hate sabermetrics.  I don't care that all the new stats say he wasn't a good player, if you hit .340 with a league leading 40 HRs and 128 RBIs (in a shortened 1995 season) you are better than a 0.3 WAR.  Replacement players don't nearly win the Triple Crown (3rd in average).

Here are three sets that I really like.  The 2009 O Pee Chee and 2009 Topps Target have a great old-school feel and look to them.  The 2008 UD Masterpieces is quite simply that a masterpiece.

Next up we have a 1995 Donruss Roberto Mejia, another of my favorite Rockies.  I really like second basemen anyway, because I used to play second.  Then we have a 2008 UD Spectrum Garrett Atkins, who unfortunately was never the same player after having his legs amputated at the knees.

Finally we come to oddball / funny photo time. The Larry Walker is from 1995 Donruss Top of the Order, one of the several CCGs that came out and continue to come out.  The Jerald Clark is amusing to me because it looks like he is getting his bat from the bottom of a giant Lego.  And we also have Eliis Burks' attempt a the Guinness world record for most thing atop one's head.


Thanks again Greg for the trade and I look to forward to our next one.  As the third Dodgers collector that has been featured in the last 4 episodes, I can't promise you every Dodger goody that comes through the Quarry, but you will get first crack at any Ethiers and Kershaws.  Okay now I need to shower to get rid off this Dodger-mania of the past few days.  Tune in next time on The Rockie Trading Post for a collector of a different team (SPOILER ALERT: Red Sox).  And with that we are officially signed off.
Posted by hiflew at 4:57 AM

I sense that purple background turning a shade of blue!

I'll be happy with first dibs on Kershaw and Ethier.

@nightowl - The only blue I am happy with is University of Kentucky blue, the real Big Blue.

@Laurens - It's nice to see someone on the internet agree that Moneyball or whatever is overrated.