Welcome to the fifth episode of The Rockie Trading Post.  Today's special guest is Bo from Baseball Cards Come to Life!.  For those of you that haven't had the pleasure of trading with Bo, he is a major set collector.  All that he is attempting to collect is definitely a challenge, but I hope my trade package and others from the community helps him out.  I sent him a 300 count box of mostly overproduction era dupes from many different sets.  In return he sent me help for a couple of sets and random Rockies.  Here are the highlights.

You may asking why I am featuring a reliever in a Dodgers uniform as the first card of this trade.  Simple because I learned the most from this card.  Seanez never played for the Rockies after being acquired for Jody Reed during the expansion draft, but he did have a surprisingly long career.  I was real surprised that his career lasted until 2008 with 4! different stints with San Diego.

Here we one of four 1995 Collector's Choice SE's that Bo sent.  We have a Charlie Hayes with an awesome face mask.  That is just a sweet card with the blue foil border, the mask, the bunting in the background.  The 1996 Topps is probably my least favorite Topps base design of the 90s.

AWESOME MULLET ALERT!  The third card in this trio of Rockies from the mid 1990s is Greg Harris and his mullet.  Actually I think mullet is an understatement for that hair.  We have to come up with a nickname for his hairstyle.

One of the two sets Bo helped me out with is 1993 Topps.  He sent me approximately 100 cards to bring me within 27 of knocking this set out (I am SLOWLY getting set wantlists together) .  I'll show off a few of the more interesting ones.

The Kirby Puckett is probably one of the more memorable (whether you love it or hate it) cards of this set.  I also like the Detroit Tigers cards of this year because a lot of them featured throwback uniforms.

This is Tim Wakefield's rookie set.  I haven't fully checked, but he has to be one of the last remaining active players from this set.  There are 14 manager cards featuring one NL and one AL manager.  This one features the great Don Baylor, Colorado's first manager.

In series 2 the first cards of the expansion picks of the Rockies and Marlins were depicted against some odd backgrounds.  The Tatum card would have worked 5 years later as the background for a DBacks pick, but Denver isn't a desert!  Andy Ashby is photoed in what appeared to be Greg Brady's bedroom.  Finally, we have Mr. Marlin Jeff Conine apparently chosen away from the Roman Gladiators.

The 1993 card I wanted to show is Sam Militello.  Why am I showing off a card of another over-hyped failed Yankees pitching prospect?  To rub salt in the wounds of Yankee fans?  Partially, but I was more interested in what it appeared Mr. Militello was saying to the camera.  Look closely, here I'll help. 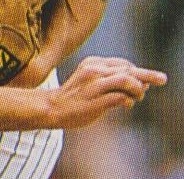 That's right, Topps caught him (probably unintentionally) flipping the bird.  Just a couple of years after the Billy Ripken mess at Fleer and the Paul Gibson crotch scratching at Score, I wonder if Topps considered airbrushing the finger away.

Next we have 1988 Donruss, Bo sent me 50 or so to bring this set within 1! of finally being complete.  I was going to show off the best photos that I got, but there weren't any in 1988 Donruss, so I figured I'd go with a trio of great 80s players.  For fun, try and guess which card I still need from this set.

Finally we have these two.  Bo emailed me near the end of our trade with a few extra cards that he just got listed by set and card number.  I asked him to add the one 1980 Topps and one insert sight unseen.  I didn't even look up who they were, I just wanted a little surprise.  SURPRISE, they are both Yankees.  Oh well, I like the Gamble and he will the starter card for my 1980 Topps set.  The Hernandez I am going to ship off to a Yankee collector.

Thanks again Bo for the trade and also make sure you check out his blog for interesting cards such as this.  On Monday, I received 5 different trade packages from generous bloggers and readers, so the next few episodes of TRTP will be coming fast and furious.  Each trader will get their own post because I believe that if you take your time and money to ship out needed cards to me you deserve and will get FULL recognition.  So until next time, this is The Rockie Trading Post signing off.
Posted by hiflew at 5:57 PM

I just busted a box of 1988 Donruss, so let me know what card you need to complete the set.

I need card #8 the Devon White Diamond King. If you get it throw it on a trade stack if you have already mailed the last one.

(*mental note: acquire '93 Donruss card of Rudy Seanez in a Dodger uniform that I never knew existed until I saw this post, shattering my belief that I had the entire '93 Donruss Dodgers set already*)

Hey life's not worth living unless you give a Dodger fan a headache once in a while.

Glad you enjoy the cards!