Welcome to this week's Sunday Afternoon Blaster.  It's been a rough week with very little sleep due to late night storms/tornadoes.  My town was a lot luckier than some, but we didn't know that beforehand.  So this week I am thankful that my town escaped damage and I hope all those negatively affected by these storms can get back to normal as quickly as possible.  Needless to say, I need the distraction of opening some cards today.  So that gets us to this week's set.  This is the first "rerun" that I have had in my Sunday Afternoon Blaster and from the looks of my Wally World it's not going to be the last.  I know of one blogger collecting this set and patiently waiting for me to post a 2nd blaster for a pending trade, so for him and anyone else needing cards from this set here we go.

Card coloration is it's availability

And the best thing about these blasters, the back panel cards 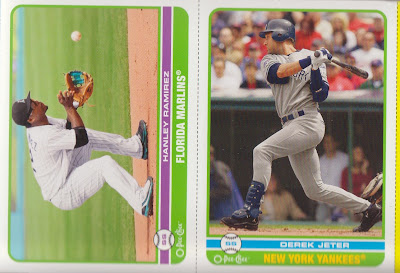 On with the show.

IMPRESSIONS (caution only about 50% new material, think of it as a self homage)
Design: C+
The design of the set is very simple and yet it somehow works a bit.  It is very reminiscent to me of 1961 Topps (which I don't like) and 1976 Topps (which I do like).  This set fall somewhere in between those two, right about the middle of like and don't like.  I do like the fact that the cards are on cardboard stock, but not the thicker Heritage type cardboard.  More like a slightly thicker overproduction era Topps card.

Inserts / Hits: C+
Once again, I love the Face of the Franchise insert set.  It is just everything a great insert set should be.  The Midsummer Memories and The Award Show are nice ideas, but they don't do anything for me as far as design.  The New York New York is everything wrong with an insert set, because you eliminate 28 teams worth of collectors before you even start with a design.  The "new" insert in this blaster was Walk Off Winners which would be good except the one I got celebrates a walk off single, which is kind of lame honestly.

Value: B+
How can you complain about 15 packs of cards from 2009 for $12?  Well I mean, I have complained a bit, but none of it has to do with the price.  This would get an A+ with a guaranteed hit, but still pretty good anyway.

Rox in the Box: 3
Great for me.  All 3 of the Rox in this box were needed by me, which was difficult because I nearly had the whole base team set (well not nearly but I had over half).  Anytime I get a Tulo, let alone a parallel Tulo, it's a good day.  I am very happy with this selection.

Will I Collect This Set: D
Well, after seeing it in person and with all the C+'s, I have decided to not pursue collecting this set.  I like it, but I don't like it enough and you can't collect everything (at least not on my budget).  I will be pursuing the Face of the Franchise insert set though.

Overall: C+
A nice "throwback" set, but overall kind of average.  The best thing about this blaster is the cards on the back of the box.  They really bring back memories of my ten year old self asking the local store clerks if they had any empty card boxes that I could have.  Claim away.
Posted by hiflew at 1:39 PM

I can't believe of all the cards I need, you didn't get a single one.

Relax Captain, I believe hiflew was talking about me.

I'd have to disagree with the C+ on the design, the base and the inserts are both As in my book. I definitely think this is one of the best designs of the last few years.

I don't disagree that the design is not really worthy of a C+ (perhaps a B+ or B) in and of itself. What drags it down in my mind is the extremely lackluster photography in the set. Out of all the cards I got the Ryan Freel was the most interesting base photograph and it isn't that great.

Night Owl: I sent you Upton the other day. Worried you didn't get it. Maybe by tomorrow.

If you don't need it or, Mr. Quarry, you still have it once this is all said and done, I'd like to claim it as I inadvertently sent my only one. :) Silly me!

Sir Quarry: I'll send you a note when I get settled. I wouldn't mind Bruce and a few others. Thanks.

My local Wally World has a TON of these discounted blasters! I may break down and buy one eventually...