I bought into this break about three months before the set was even released, while we still thought this was a 450 card set.  As I mentioned in the last break results, the Rockies were woefully underrepresented in this set with 0 autos or relics and I would have skipped this break had I known that.  It's not the lovely ladies at A Cardboard Problem's fault by any means, but the Rox were not worth the price, but I did finish off the team set and got several minis.  Let's check them out.

These are the three cards I got for the base set that I did not get in Dimwit's break.  The Helton is a "common" while the other 2 are short prints.  I got 2 of each of the short prints (the 2nd Fowler is already traded, but if you need #332 Wigginton let me know).  I also got at least 5 copies of the six common Rockies, which I broke up and randomly inserted as a bonus in my group break packets (assuming they weren't sent back).

I did 2 of the 3 bronze bordered cards featuring Rockies.  The three are "the big 3" of CarGo. Tulo, and Ubaldo.  I picked up the Ubaldo on eBay, but these two came from this break. 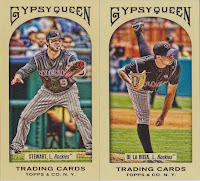 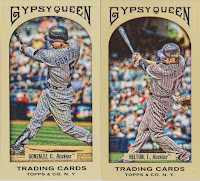 These 4 minis are the regular back variety.  I actually have two of the de la Rosa and Helton so if you are building this set let me know and they are yours. 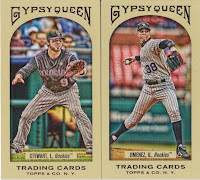 These two are the red Gypsy Queen backs.  No differences between the fronts at all.  I am not a fan of "back variations" because in the binder pages parallels should at least look different on the front (even a stamp or something to set them apart).

Well that was my break.  No big scores (or even little scores like a sepia or leather mini), but that's okay.  Every team cannot win every break and my bad results from this break meant some other team had a great one.  It will all come back around in the next one.  Thanks for reading.
Posted by hiflew at 6:39 PM