The title of this post should be a dead giveaway.  I have finally gotten my mitts on some 2014 Topps of my very own.  My first impression of the cards online was not a good one at all.  However, in hand the set actually looks pretty good.  At the very least, it is not nearly as bad as I once thought it would be.  Let's go through and I will showcase the newest additions to my collection.

This Jay Bruce is officially my first card from 2014 Topps.  Most of the time I never think to remember my first card of any year.  The only year that I know for a fact is 2010 and that was Carlos Gomez of the Brewers.  As far as the design on the front, I will repeat that it is not as bad as I once thought.  That is the exact opposite of my feelings last year.  The 2013 Topps design got much worse the more I saw it, while the 2014 design has gotten better...so far. 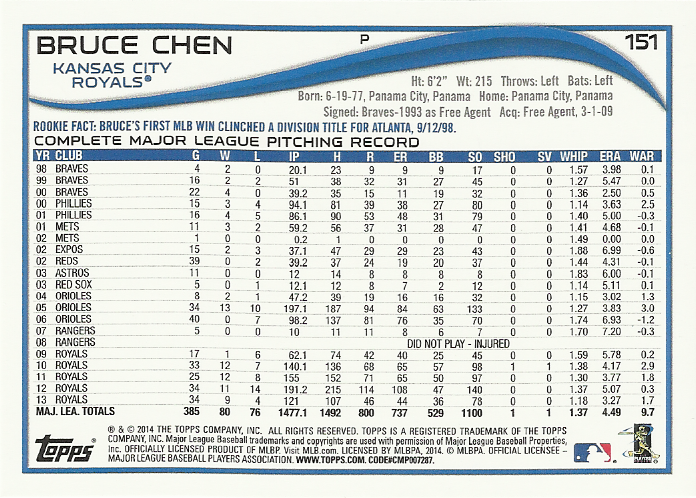 Let's take a look at the back.  I have blown it up just a bit so it is easier to see.  The first thing that pops out at me is that Bruce Chen has played a lot longer than I ever thought.  But as far as the real feelings, I really like the back of the cards.  My favorite part of this card back is the "Rookie Fact."  They are 1,000,000 times better than last year's "Career Chase" which informed on one card that "With 115 strikeouts, Chatwood is 5,599 away from Nolan Ryan's all-time record of 5,714."  Vitally important information with ZERO chance of ever mattering.  At least here you learn something actually mattered such as Bruce Chen's first victory being a division clincher.  That is interesting to me.

There is also the addition of the WAR stat to the back.  It replaces strikeouts for batters and complete games for pitchers.  I don't have a problem with this, but I bet sabermetric guys will.  The WAR that is talked about mostly on the forums is the one from Fangraphs while the one listed on the card is from Baseball Reference.  The numbers between the two sites are very different and is the major reason that I don't take the stat that seriously.

Here are the only Rockies I pulled from the set.  It figures that I get only get three while everyone's favorite Dark Hooter got six in his box.  I have complained a LOT about just about everything that "modern Topps" has done, but giving Todd Helton and Mariano Rivera final cards matching their uniform number (#17 and #42 respectively) is a tradition that I could really get behind.  I don't want to see this happening for everyone, but for special retirements I love it.  If only Roy Halladay had retired earlier as he could have been included as well.

The only Rookie Cup out of the possible 5 in Series 1 that I got was this Wil Myers.  4 to go.  Cover boy Mike Trout is #1 card in the set.  The final card in the set is Yasiel Puig, but he did not appear in my pack.

The hero numbers were occupied by the usual suspects and surprisingly I got all three in this one hanger box.  Bryce Harper is #100, Derek Jeter is #200 on reputation, and Yu Darvish is #300.  I think I might have to jump ahead of Night Owl and name this set, "the Card Catalog set."  If you store the cards in a box, the tab on the front stick up just like the old library card catalogs.  I could see it also being called "the File Folder set," but I am a library nerd.

This is a card that I find very amusing.  I first spotted the card, not on the baseball card blogs, but on the front page of Yahoo.  The funny part is the entire team vociferously telling Morales to be careful in his celebration.  As you may remember, Morales is the guy that broke his leg celebrating a grand slam a few years ago.  I found it to be morbidly funny.  Although I honestly can't stand the card because Morales is not the focus of the photo, Felix Hernandez is.

And now let's play America's favorite new game show, Who Did it Better?

In the three matchups, I have to pat myself on the back because I feel I made a better card for all three of these players.  I always knew I was better than Topps, but this conclusively proves that I am a much better card maker with my one man operation than this company that has only been around for 75 years or so.

Wait...what's that...oh there are more than just these three...oh okay.  Let's finish the game then.

Topps kicked my butt with these three cards in my opinion.  Oddly two of these cards have a football theme to them with the catch in the DeRosa sunset card and the Oakland Raiders logo hanging out in the background of the Doolittle card.

So our game ends in a tie.  I was actually hoping to get a card or two that used the same photo to break the tie, but I didn't get either card of the two cards that I learned about from Dimebox Nick and none of the rest of my pack matched up.

And now we come to the parallel portion of the box.  The old-fashioned gold parallel is once again a White Sox player.  I always pull White Sox gold cards and I don't know why.

The middle is the continuation of the line which includes the diamond parallels in 2011, the gold sparkle in 2012, which I refer to as the Urine Cascade cards, and the emerald and sapphire parallels in 2013.  According to Beckett, this year's version is called "Red Foil."  Really?  That sucks.  At least call it ruby or garnet.  I think I am going to call these "Blood Rain" cards and I actually don't intend that to be an insulting moniker.

Next is the Power Players partial parallel.  Only 110 of the cards in the set have this parallel which is an online code hopefully more like 2010's Million Card Giveaway than 2012's awful fake coin thing that doesn't deserve to have its name remembered.  The card itself is kind of interesting because it is the only parallel which doesn't use foil on the player's name.  I wish Topps would just get rid of the foil at least for one year.

Topps seems to have loaded up on the parallels this year, but they haven't forgotten the insert sets.  I like the Upper Class which looks MUCH better in person.  It focuses on the rookie year of veterans.  It is strange because Matt Holliday is a Rockie in this set.  The Future is Now is nice looking, but I don't really see the point of the set.  It is pretty much just a way to get another Yasiel Puig into this set.

And now for my bitterness to shine through.  I HATE HATE HATE HATE HATE the 1989 minis.  They would have been fine acceptable if they were set up like the 1971, 1972, or 1987 minis.  However, Topps decided to die cut these to where there is a little zit like object that sticks out on the bottom of the card.  It is just a horrible creation and whoever had the idea should be tarred and feathered at least twice.


I really didn't want to end with such hate, because for the most part I really enjoy this set, but that's the best way the story flowed.

Email ThisBlogThis!Share to TwitterShare to FacebookShare to Pinterest
Labels: 2014 Topps

I hated the design from the onset, but my stance has softened on it a little. I think my brain just blocks out the dumb looking tab on the right.

I think the yellows are only found in the retail hanger boxes. Not positive though. I AM positive that I love 'em. I actually don't mind the minis, either.

Very modest of you to only choose six cards to showcase in your "Topps Showdown". While I agree with your brief analysis, I think that given a larger sample size, you'd be kicking on the winning end pretty easily.

And yes, there are Toys R Us purple cards this year.

I rather like the "Blood Rain" moniker for those parallels. Certainly beats the heck out of "Red Foil". That's just plain boring.