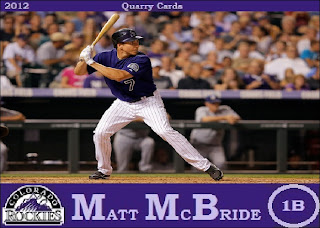 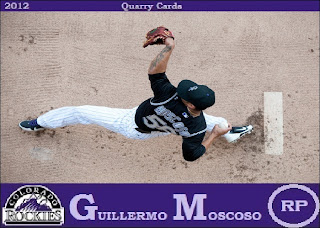 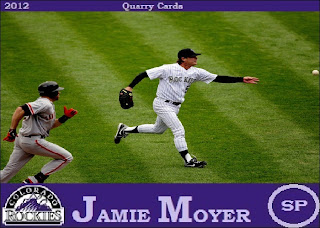 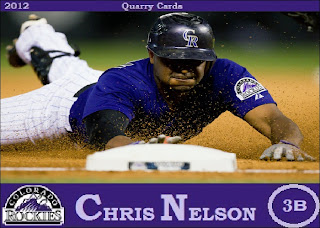 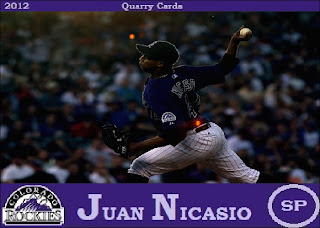 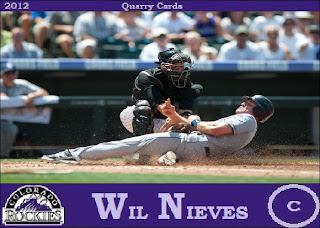 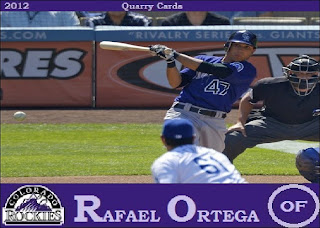 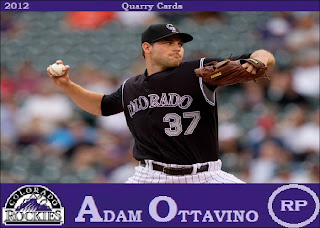 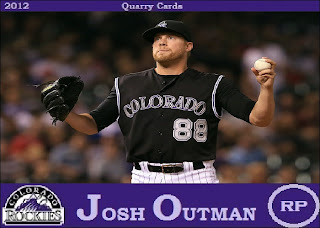 I mentioned yesterday about showing off 2 of the 3 worst offseason additions for the Rockies in Jeremy Guthrie and Ramon Hernandez.  Well, here is the third in Guillermo Moscoso and Josh Outman.  The Rockies traded Seth Smith to the A's for these two who promptly proved that Oakland's stadium makes mediocre pitchers look good.  Moscoso will probably be back, but Outman might get non-tendered hopefully.  Chris Nelson really proved to be a nice surprise with his regular playing time at third base.  He was the Rockies 1st round pick in 2004 (the year before Tulo), but had never been given a real shot at the big league level.  Rafael Ortega was called up during the final week of the season and made his MLB debut in 2 games for the Rockies.  In my card collection, he will always be known as "Mr. 300" because he is officially the 300th member of my One of every Rockie collection.  It was tad anticlimactic because I already had his cards before he made his debut.  Finally, we have Jamie Moyer who was a great story not only for the Rockies, but for baseball in general.  Unfortunately, he was a much better story than pitcher and was cut in June.

As far as photos, surprisingly (aside from one) the best of this lot are all pitchers which usually make for the most boring cards.  I like the Moscoso just because it is an angle that is not usually shown on cardboard.  It is a bullpen shot, just in case some of you were wondering how they got over the mound.  The Moyer photo shows off the fielding of a pitcher, something that is very underrepresented with cards.  I also love the Nicasio simply because of the light "aura" that surrounds him.  It really seems to be somewhat of a supernatural type card (well maybe that's a bit of overselling).  However, my favorite of the group is without a doubt the Chris Nelson.  I love a good photo of sliding into the base, especially this close up.

Just 17 to go and this year's Quarry Cards output is finished.  What do you think so far?  Any favorites here?


Thanx for reading.
Posted by hiflew at 6:50 PM