One of my favorite things to do with this blog is creating my own cards.  With my recent financial situation, creating cards is even more important.  Rather than giving up the hobby until things turn around, I can at least keep up somewhat even without purchasing new cards.  With this year's Quarry Cards offering, I decided to go with a completely unique design of my own.  Unlike last year's mixed design, this year the cards are completely made up of landscape-oriented photos (horizontal cards).  It was inspired by several sets including: 1991 Score, 1960 Topps, and 2001 Fleer Tradition, along with my own imagination.  There are 51 cards in this set and I will be showing them over the next six days in an 8-9-8-9-8-9 format.  I hope you guys enjoy the work. 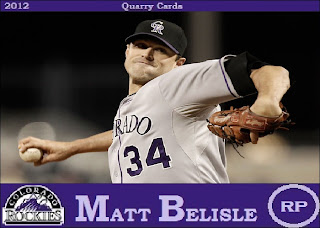 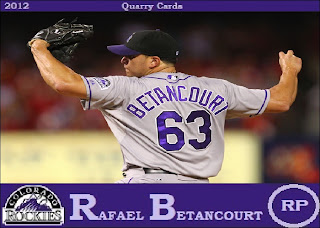 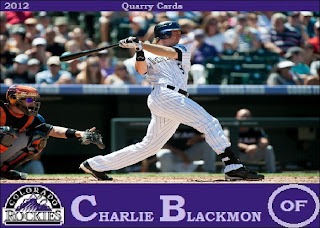 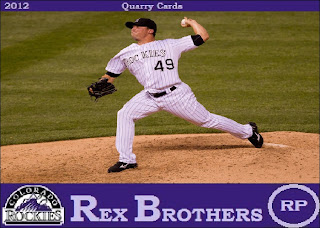 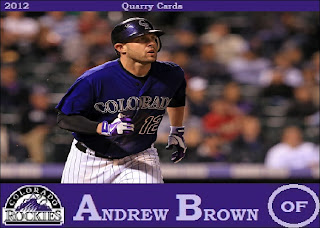 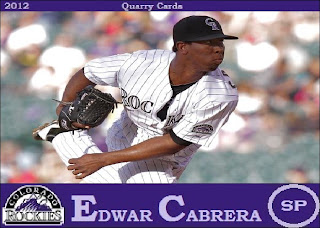 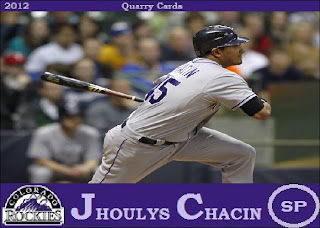 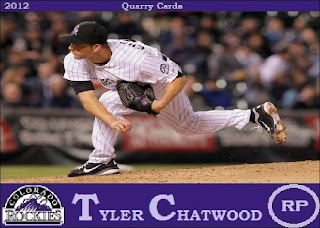 
Like in 2011, I chose to number the set alphabetically by last name.  Unfortunately, that led to some unmemorable photos to start with, but that tends to happen when it is a group of mostly relievers.  They only tend to have their photo taken when they give up a big hit or something bad happens so the choices are not very plentiful.  Of this group, I think that the Chatwood is the best just because the photo really matched well with the available space.

All of these players are under contract or are arbitration-eligible for the 2013 season.  The reason the percentage is so low for Brown and Cabrera is because I expect them to be at AAA in 2013 although Brown could easily be released.  Blackmon is hard to figure.  He is in the same situation as Eric Young last year.  I could see him being a starting OF (after a couple of trades), a backup OF (after 1 trade), being traded in a package deal, being swapped for another prospect, or going to AAA.  I honestly have no clue what the Rockies plan for him is.  That will not be the last time I write that sentence for this team.  The rest I expect to return unless they are traded.  I hope they aren't traded because the bullpen is one of the Rockies biggest strengths right now.  Although, it was used very poorly in 2012 by Jim Tracy and Co.


Which one of these cards is your favorite?  What do you think of the design?  How could it be improved?

Love the design! My favorite would have to be the Chacin, because I'm a sucker for cards that show pitchers hitting.

Very nicely done! I like that the Rockies colors are front and center on the card and the horizontal format is a nice touch.