Just a Bit Outside has become one of the newer blogs that is identified as a group break Mecca.  Kyle always has 1-2 breaks either running or shipping and I think that is a great thing.  Although it can get a bit expensive.  Last time through in his #4 break, I pulled a killer Tulo relic along with a bunch of Heritage SPs.  This time in break #5, I was far less successful, at least with my Rockies.  My second team, the Twins this time, did very well for me.  Let's take a look at some of my cards from this break.

The box I was the most successful with, at least with the Rockies, was by far 2003 Bazooka.  I actually didn't have any base cards for this set, despite opening a box for my own group break last year.  I still need 4 more for the team set, maybe I should do another group break with this box involved down the road.

I also got a mini parallel for the Jason Jennings.  In case you haven't seen them, these are not A&G sized minis, they are more comparable to the 87 Topps minis from this year's flagship set.  The only other needed Rockies card I got was the Jeff Francis from 2005 Topps Chrome.  So as you can see I did very poorly with my Rox this time.

But then we get to the Twins. 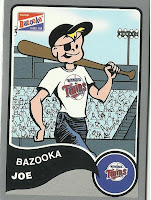 I got both the base and the "silver chunk" parallel of Bazooka Joe for the Twins.  I like this card because each of the 30 teams were represented with only the logo on the shirt changing.  This is card #7 and is from the time when Topps had that number retired.  This is much better than no card at all.

A trio of Twins from the Bazooka set.  One thing I both liked and disliked about Bazooka was the First Year cards.  Some like Terry Tiffee here did make the majors, even if it was just for a couple of short stints.  Others though like Kip Bouknight of the Rockies never made it and their cards just kind of bring the set down.  It is definitely a good thing that the whole Alex Gordon debacle happened.

A pair of parallels round out the Twins from Bazooka.  The Pierzynski is a regular mini, while the Hunter is a color logo parallel.  The color logos were a partial set parallel for mostly the star players.

The only Twin I got from the 2005 Topps Chrome box turned out to be a really good one.  This is a refractor of All Star Rookie Joe Mauer.  Even though Mauer turned out to be a great player, his inclusion on the All Star Rookie team was more of an indictment on the rest of the rookie crop of catchers.  He got hurt in late May and only played 40+ games the entire season, but no other rookie catchers had better stats.

Another box that was opened was 2008 SP Authentic.  I was shutout of needed Rockies, but I did get a nice triumvirate of Twins, along with a special treat at the bottom of the page.

The final box opened was 2003 Flair in which I was also shutout of needed Rockies.  I did pick up a pair of Twins including current Rockie Michael Cuddyer.  Cuddyer is really off to a hot start this season.  I hope he keeps it up.

Here is my big hit for the break.  A By the Letter manupatch Scott Baker letter "B" #'d 46/99.  This nameplate would be a pain to put together because you have to spell out not just "Baker" and not even "Scott Baker."  You have to spell out "Scott Baker Minnesota Twins" to have a complete set and all the letters are #'d to 99.  A tough little project, but I'm sure if anyone can do it, it's Rhubarbrunner.  This card and several of the above Twins are already en route to the biggest Twins collector I know.
Posted by hiflew at 5:33 PM

Email ThisBlogThis!Share to TwitterShare to FacebookShare to Pinterest
Labels: Just a Bit Outside

I won't be actively trying to spell it out, but passively...sure!

The Baker card is on a bit of a melancholy note, his having probably thrown his last pitch for the Twins.