One of the two breaks that I try to get in every month is with Sam of The Daily Dimwit.  Rarely does one of Sam's breaks go poorly for my Rockies.  Unfortunately, this was one of those rare occasions.  I only got 9 Rockies total and 4 of them were dupes.  Considering that with the sets involved, I only had maybe 8 total cards before the break...4 dupes ain't good.  You can't win them all and I did get 5 new cards of my Rockies.  Here are all nine cards for my Rockies.

These 3 were the highlight of the break for me Rockie-wise.  Sam actually decided to include this 2003 Playoff Portraits in this break because of a trade with me that included a relic from this set.  It really does look and feel very nice.  The cards are textured just like a canvas, you can actually feel the brushstrokes.  A very nice set.

Here we have from 2004 Upper Deck Diamond Collection Pro Sigs, the Rockies non-SP team set.  I didn't have the Walker, but I had the other two.  I still need several SPs and all the parallels from this set. 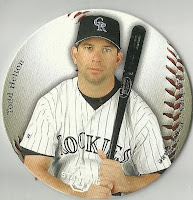 The other two boxes in this break were 2003 Topps 205 and 2003 Upper Deck Standing O.  Above is the Rockies entire haul from both boxes combined.  Ugh.  The even worse news is that the Jennings mini is the only card I needed.  The cherry on top is the Helton die cut is the only card from Standing O that I had before the break and it stayed that way.  So like I said, my Rockies did horrible.


However, with my second team, the Cubs, I did relatively well.  I picked them up in a trade with Ryan H of O No Another Orioles Blog for my randomized team, the Blue Jays.  I didn't get a "hit," but I did get some interesting cards and a couple of SPs.

The Ryne Sandberg from the Playoff Portraits box is probably my favorite card from the break.  It's absolutely dead on.  The middle card is one of those instances where it kind of sucks to be a fan of a team created within your lifetime.  It is a George "Peaches" Graham from the 2003 205 set.  Graham played half year for the Cubs in 1911 after being traded from the Boston Rustlers.  The Rustlers was one of the many former nicknames of the team now known as the Atlanta Braves.  I can't learn that much history from a team created in 1993, because I was there.  The Sammy Sosa is a silver signature parallel for the UDDCPS set. 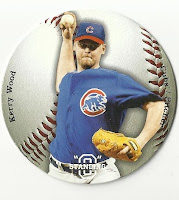 Here is smattering of Cubs that I collected for one person in particular.  Jon from Community Gum is a big-time collector of both Kerry Wood and Greg Maddux and is one of my better trading buddies.  Jon if you read this, you have dibs on these six.

It wouldn't a 2003 set without an abundance of Mark "The Bird" Prior (yes I know that's not his nickname, but his career mirrored Fidrych).  I ended up with both the base Prior with the modern logo and the SP with a what looks like roadkill logo.  The Sosa is just a base mini, but doesn't he look douchey with the shades tilted on his hat.

I'll end this with a trio of SP rookies.  In the early 2000s, many sets had short-printed rookies.  If a player took off, like Pujols or Ichiro the card became worth a mint.  Most of the time you end up paying like $2 for someone you never heard of like these three.  Actually that's not true, I have heard of Todd Wellemeyer but you get the point.


All of these Cubs (and many others I didn't show) are for trade, but like I said Jon has dibs on the Woods and Maddux.

Thanks for the break, Sam, and I am looking forward to the Trade Bait Draft tomorrow night.
Posted by hiflew at 7:49 PM

Thanks for the dibs!
I have a couple, and I'll send you an email about the rest.
--Jon